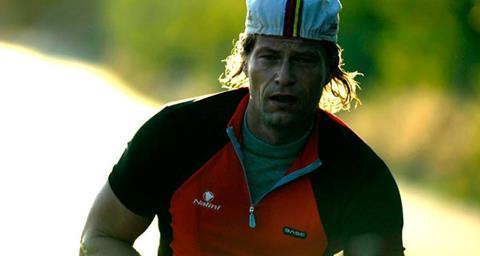 Til Schweiger’s dimpled chin has won over an even larger international fanbase since Inglourious Bastards opened last month. His action acolytes, however, may not warm so much to this more downbeat triumph-over-adversity drama, an affecting if somewhat pretentious portrait of a sensitive, ne’er-do-well cyclist who finds his way after losing a leg.

Matthias Emcke’s visually confident debut feature showcases the Jim Morrison side of this good-looking leading man, presenting him as he broods meaningfully from beneath an unkempt thicket of hair. That, plus a plangent mixture of romance, bromance, father-daughter love and a soundtrack dripping with songs to commit suicide by, could translate into modest date-flick success given diligent emphasis on its charismatic star.

Taking off on the true story of Canadian cyclist Steven Sumner, Emcke creates a German surrogate in Marc Sumner (Schweiger), a handsome cyclist whose dormant talent for writing is overshadowed by his gift for picking up women.

Mentally scarred by the neglect of his late father, whom he writes about at arduous length in a would-be memoir, Marc finds himself  incapable of being a proper father to his own daughter Sarah (Luna Schweiger, Til’s real-life daughter). Equally inept at holding down a job, he spends his time carousing with his rock-star buddy Angus (Erceg) or seducing co-workers and women alike with his tall tales.

After studiously setting his protagonist up for a fall, Emcke proceeds to sow the seeds of his redemption.

Surviving a motorcycle crash by the skin of his teeth, Marc loses a leg, a turn of events with obvious consequences for his two passions, sex and cycling. Buttressed by the combined love of Sarah, Angus and girlfriend Nika (Pallaske), a relationship he was cultivating at the time of his accident, Marc stumbles his way toward a responsible life.

Emcke does his level best to camouflage the high-concept flow of  his character’s trajectory, weaving in lyrical passages from Marc’s writings and (one too many) montages of Marc falling in love or sitting wheelchair-bound in the rain to the soulful wailing of Nick Drake and Tom McRae.

Phantom Pain also benefits from the bleached canvas of cinematographer Ngo The Chau, whose palette of washed-out colours speaks eloquently to the drained life-force of its woebegone protagonist.