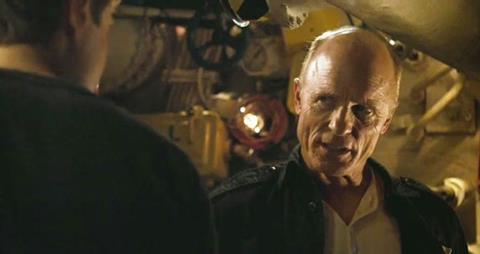 Ed Harris, David Duchovny and William Fichtner bring a good deal of class and poise to this period submarine thriller, with writer/director Todd Robinson making the most of the claustrophobic staging in his story of a Russian submarine going rogue, set against the Cold War 1960s backdrop.

Production design, costumes and smooth interior cinematography help build the tension, while at the core of the film is a fine, controlled performance by Ed Harris.

The submersible action-thriller has long been a Hollywood staple, with the enclosed environs and usually tense wartime backdrop providing great fodder for drama. And while Phantom is never quite as suspenseful as its storyline suggests it should be, it is highly watchable with Ed Harris convincing as the Soviet submarine captain trying to save the world from nuclear destruction.

Harris plays Demi, a Russian submarine captain who think he is heading to retirement, but it handed a classified mission to test a secret device on-board an ancient battery-powered sub, the B67, that is set to be decommissioned. Included in his new crew is Bruni (Duchovny) - who is on charge of the device – and his team, who seem to have their own agenda.

It turns out the secret weapon is in fact a cloaking device, and that Bruni is part of a rogue KGB group that plans to use the device to infiltrate the American fleet and launch a nuclear weapon to try and set in motion a nuclear war between the Americans and the Chinese.

It seem that Demi has been chosen for the mission because he is deemed damaged goods. On an earlier mission he had been involved in an incident that saw several of his crew die and he suffers from seizures. He was chosen for this new mission because it was perceived he would falter and Bruni would easily be able to take over.

In many ways the film is a mash-up of elements of The Hunt For Red October, Crimson Tide and K-19: The Widowmaker, and while it lacks the budget for substantial underwater special effects work it makes up for that by focusing the drama in the enclosed environment of this old-fashioned submarine. Production design, costumes and smooth interior cinematography help build the tension, while at the core of the film is a fine, controlled performance by Ed Harris (who has previous underwater experience with The Abyss) who gives the film a sense of convincing gravitas.

David Duchovny is fine as the rather one-tone Bruni, though impressive – as always  - is William Fichtner as Alex, the Captain’s second in command. Lance Henriksen contributes a brief cameo as Markov, the commander who gives Demi his mission, while Jonathon Schaech (sporting a Village People 1960s bushy moustache) is striking as the sub’s political officer.

Somehow Phantom never quite ratchets up the expected amount of tension in the final half hour (plus there is a misguided ‘ghostly’ sequence at the end), but it certainly delivers in terms of a solidly made period drama, driven by a series of strong performances.