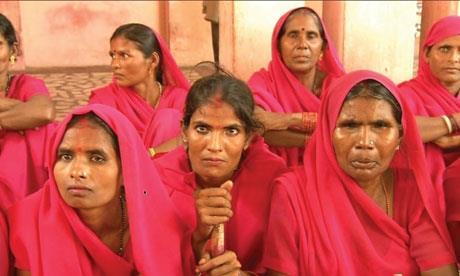 Sampat Pal Devi is a foul-mouthed self-styled enforcer for the Gulabi Gang (Pink Gang), a group of women who team up to fight abuses in Uttar Pradesh State. She’s a belligerent character who loses more battles than she wins, which makes Pink Saris less triumphant than Kim Longinotto’s earlier rousing documentaries.

Longinotto’s bare-budget projects tend to be about women who take matters into their own hands.

Pink Sariswill connect with Longinotto’s existing audiences at festivals and art houses. Television in Europe and North America is another promising market. Festivals specialsing in human rights and women’s issues will extend its reach.  In India, which lacks an art house circuit, the message will reach the heartland by dvd.

Longinotto’s bare-budget projects tend to be about women who take matters into their own hands. In Pink Saris, their targets are practices that have kept women subservient for centuries – forced child marriages, the burning of widows, and the routine beating of women by parents and in-laws.

The title of Longinotto’s latest is misleading. It suggests that the film is about a movement. This isn’t the new version of the Black Panthers. There’s not much of a gang, just one individual who finds herself singlehandedly confronting men in authority in households and villages.  Most of the time, she’s the only one in the pink sari.

The documentary’s tour of towns and villages in Uttar Pradesh reminds us that much of dusty, crowded, impoverished and illiterate India is decades away from being the modern country that its leaders boast about.

With the camera racing to keep up with Sampat, Longinotto shows us that India on the local level is anything but modern in its attitudes toward women. The filmmaker elbows up to girls, often married at 12, who talk to Sampat about fleeing the homes of violent husbands and in-laws.  Men (and some women) defend the age-old practices brazenly. Sampat calls them names and threatens to call the police, giving a new twist to the old question, “When did you stop beating your wife?” When all else fails, she curses and spits.

The feisty activist – not quite The Bandit Queen but a raging rebel by village standards – is a break from Longinotto’s template of docs that dutifully observe victories when women join together.  Once a child-bride and a victim of abuse herself, Sampat has no fear, yet persuading other women to follow her example is, at best, a work in progress. This isn’t so much a film about women’s empowerment as it is about the enormity of the challenges anyone fighting for women’s rights in rural India will face.

The documentary is a series of encounters – mostly family fires that Sampat either puts out or pull victims from. As in Longinotto’s previous films on women judges in Liberia (Sisters in Law, 2005) or activists fighting on behalf of neglected children in South Africa (Rough Aunties, 2008), the camera pushes its way into disputes and waits while people in the room have their say.

Given that approach, the director has the deserved reputation of having never met a meeting that she didn’t like (or film). Pink Saris takes her beyond that syndrome. The title suggests rightly that India offers a new abundance of color for her palette.  As women under attack from their families cover their faces out of shame or address the camera head-on, close-ups reflect the level of empowerment that Sampat is able to achieve.

Production values are generally high in this portrait of a radical that injects more gestural cinema than before into Longinotto’s filmmaking – no surprise for a film about a woman who almost never stops moving as she shakes people loose from their traditions. It’s her most dramatic film since the remarkably explosive Divorce Iranian Style (1998).

Close to the end, Longinotto films a donkey cart onto which women in colorful saris have piled. There’s no doubt that they are viewed as the property of the man who owns the cart. The film cuts to a shot in the same location of cows luxuriating their way into a stream.  Without any speechmaking, the camera tells you what an activist like Sampat faces.