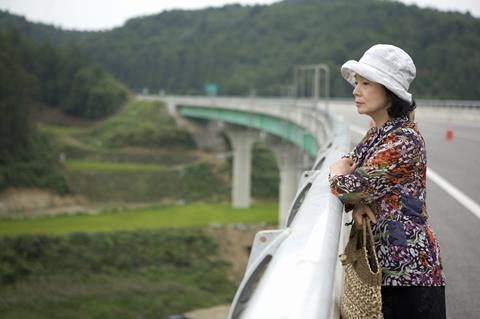 Korean auteur Lee Changdong’s quietest and most thematically complete film to date, Poetry charts a grandmother’s attempt to write a single poem, while she deals with a failing body and mind, and the terrible consequences of her teenage grandson’s irresponsibility.

The moving lead performance of veteran actress Yun Junghee (in her first film role in over 15 years) might provide the film with something of a longer theatrical and shelf-life on home ground.

Lee is revealing himself to be something of a Korean Douglas Sirk: like Changdong’s recent films Oasis and Secret Sunshine,this is an intelligent melodrama about a sensitive woman in a bullying male world. It takes a while to make its point, but patient viewers will take a cue from the image of the river that opens and closes the film, and look beyond the ripples of drama on the surface for the hidden depths.

Poetry opened in Korea on May 13, and its underwhelming debut at number seven in the box office chart, despite a relatively healthy 194-screen rollout, show that Lee’s films are still considered hard work by his fellow countrymen.
The moving lead performance of veteran actress Yun Junghee (in her first film role in over 15 years) might provide the film with something of a longer theatrical and shelf-life on home ground, but elsewhere this is strictly arthouse, and even then not an easy sell.

We first meet 66 year-old grandmother Yang Mija - a refined woman in a shabby world, who dresses with old-fashioned elegance - in a medical clinic waiting room, where bored patients watch TV images of suffering and grief in distant wars. Mija complains to the doctor of a tingling in her arm, but he’s more concerned by the fact that she’s forgetting words for things.
She makes her regular visit to an elderly man who has suffered a stroke; she washes him in the bath and cleans the house. Back at home she fixes something to eat for her idle and uncommunicative live-in grandson Wook, whose mother is away earning money in Pusan.

In a local cultural centre, Mija enrolls in a poetry class, and her teacher soon inspires her with a mission: by the end of the course, she must write a poem. There’s a cultural issue here that not all international viewers will get. Poetry is still extremely popular in Korea, and the top poets sell thousands of copies of their books; but the legacy of classical Korean verse, written in Chinese, means that the writing of a poem is even today considered a more formidable task than it might be in the West.

A father of one of Wook’s schoolmates calls Mija to a meeting where she is shocked to learn that her grandson was part of a gang who raped a girl called Agnes at school. Agnes later committed suicide. Mija is devastated, but the other five, all of them fathers, seem more concerned about how to keep the story quiet and how much compensation to offer the mother of the victim. As her diagnosis of Alzheimer’s comes through, Mija struggles to hold herself together, raise the money required, force her grandson to confront his deed - and write that poem.

Set in an unassuming Korean provincial town, the film’s visual style keeps things real. It’s the world of men who use women then fix things with money - or, like the policeman who appears in the film’s beautifully judged final scene, sabotage poetry readings with lewd jokes.