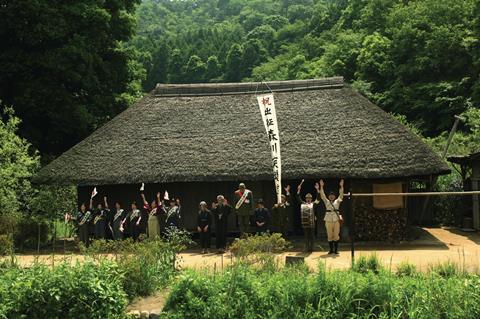 At the ripe age of 98 Kaneto Shindo may still be a fresh-faced young writer/director as compared to Manoel de Oliviera (now over 100 and still going strong), but clearly age does not diminish his passions if the impressively staged drama Post Card is anything to go by. The film fairly bursts with anger and compassion as it dwells on the home lives of ordinary rural Japanese families towards the end of World War II.

There are moments of elegant lyricism as veteran filmmaker Kaneto Shindo constructs his gently powerful film.

Perhaps too straightforward in structure – and with some ill-judged over-acting in the final scenes – and uncomplex in tone to attract buyers (and not as strange and controversial as Koji Wakamatsu’s Berlin competition film Caterpillar, set in a similar period), it is most likely to be of obvious interest to festivals and cinematheques, though could also have a life on DVD.

Screening in competition at the Tokyo International Film Festival, though, Post Card is a thoughtful and insightful film that travels an easy path between melodrama and angry anti-war rhetoric, with Shinobu Otake delivering a fine performance as the woman who links together the lives of three Japanese military men.

Soldier Keita Matsuyama (Etsushi Toyokawa) is on the top bunk above his best friend in his 100-man unit Sadazo Morikawa (Naomasa Musaka), and as he is about to be shipped off to fight he passes Morikawa a post card from his wife Tomoko (Otake), and asks him to tell her how much the card meant to him should anything happen to him.

Matsuyama dies at sea, and Tomoko ends up marrying his younger brother as a way of keeping the family together (she lives in virtual poverty with his parents), but he also dies in the war. When Morikawa returns to his home at the end of the war (sporting the largest rucksack ever seen on screen), he finds his wife has left him…in fact she has run of with his own father.

He decides to start a new life in Brazil, but wants to make a brief stop to deliver the post card back to Tomoko. He finds her struggling to survive and being pursued by a local official (Ren Osugi), who wants her to be his lover.

Here the film enters into its wailing and crying section as Tomoko discovers her first husband died due to a lottery in the unit, which saw men sent to various postings due to lots drawn by their superior officers. Matsuyama was sent to die while Morikawa was sent to build barracks and managed to live. There is powerful stuff lurking here, but at times the wailing and screeching is just too over-the-top, and the scenes are not aided by the mis-judged comedy cameo from Ren Osugi as the suspicious local official who thinks Morikawa is simply after the woman he wants.

But in amidst the wailing, Post Card delivers memorable moments detailing how the war impacted on those left behind, and there are moments of elegant lyricism as veteran filmmaker Kaneto Shindo constructs his gently powerful film.