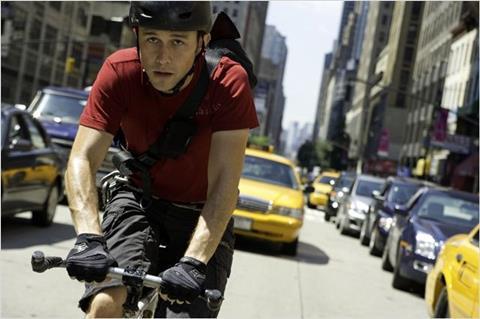 Set in the eccentric world of New York bicycle messengers, Premium Rush plays like The Fast And The Furious on two wheels instead of four. And though the exciting bike chases only just make up for the half-hearted plot, this energetic action thriller from writer-turned-director David Koepp might still find an audience among younger moviegoers who are into the subcultures of skateboarding and extreme biking.

Gordon-Levitt is, as usual, a likeable hero, though he’s underused in a film that’s plainly more interested in kinetics than drama.

The presence of busy lead Joseph Gordon-Levitt (from The Dark Knight Rises and next month’s Looper) should help broaden the appeal when worldwide distributor Sony opens the film wide in North America on Aug 24. The best international results are likely to come from major cities where the milieu will be most relatable.

Gordon-Levitt’s Wilee (as in Wile E Coyote from the Looney Tunes cartoons) is a former law student who’s now the best - and craziest - bike messenger at the Manhattan operation that also employs his sometime girlfriend (played by American Reunion’s Dania Ramirez) and his cocky rival (Wolé Parks, from TV’s Law & Order).

Dispatched on an urgent run from one end of Manhattan to the other, Wilee gets caught up in shady dealings involving Chinese smugglers and a city detective trying to pay off his gambling debts (Take Shelter’s Michael Shannon).

Koepp (writer or co-writer of blockbusters including Jurassic Park and Spider-Man) lets the story unfold in near real time, with a couple of extended flashbacks to fill out the plot. Most of the action takes place as the characters take wild rides dodging traffic, cops and other pursuers on crowded city streets. The bike chases are nicely shot (on actual Manhattan streets) and they’re jazzed up with smartphone style on-screen graphics and pounding music.

Gordon-Levitt is, as usual, a likeable hero, though he’s underused in a film that’s plainly more interested in kinetics than drama. Shannon stands out more, generating laughs (and occasionally going over the top) as the story’s manic villain.