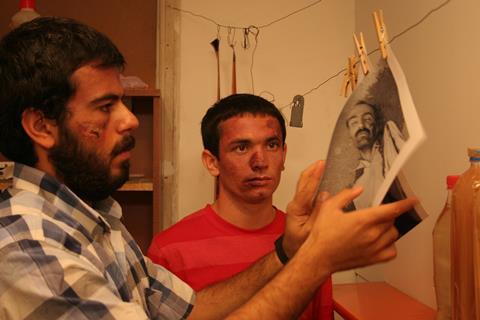 Sedat Yilmaz’ report on the fate of Ozgur Gundem a fiercely liberal Turkish daily published for less than two years (1992-4) before being shut down by the military regime, represents everything news reporters want to hear about themselves. It is the true story of fearless journalists fighting the corrupt government at the risk of their own safety and often paying with their lives for insisting to print facts that embarrassed the authorities or worse.

The final conclusion, strongly supported by the final titles, speaks of the oppressively grim conditions imposed on the Turkish press.

As such, there is little doubt that despite considerable cinematic shortcomings, it will find its own niche in specialised film events dealing with human rights and freedom of the press, all over the world. At home, it has already been compensated with awards in Antalya, Ankara, and now Istanbul (Special National Jury Prize, Human Rights Prize).

As a matter of fact, Yilmaz, who wrote, directed, edited and produced the film, deals only with one of the daily’s offices, but certainly one of the most sensitive ones, run by the paper in the city of Diyarbakir, in the south-east of Turkey, a hotbed of troubles where the strong arm of the Ankara regime brutally clamped down on the Kurdish minority, constantly breeding violent incidents which were not supposed to be mentioned in the media.

Told through the eyes of 17 year-old Firat (Aram Dildar), the only one in a team of six who is still around by the end of the film, the script records a long series of attempts to break down the spirit of the reporters who persisted doing their job, regularly sending their material to their main office in Istanbul, first by post, then, once it proved unreliable, by courier, and finally resorting to the assistance of friendly bus conductors.

Abducted on the street and beaten up for revealing the illegal activities of the army and paramilitary nationalistic groups against the minority population, their office broken into every few days under the pretence they had secret stuff in their possession, shot in broad daylight once they refused to desist from their activities, this fearless bunch were systematically drawn into tight corners and deadly traps and murdered or driven away, one after the other, until only Firat, the resourceful apprentice who could fix anything in the office and find solutions for every problem is left standing on his two feet.

No doubt an inspiring tale, but Yilmaz, who was teaching, lecturing and writing on cinema before embarking on his first feature, relies on the dramatic impact of his material, but does little to mold and shape it any further.

Told mainly through talking head shots, edited rather hesitantly and never taking the trouble to develop any of the characters, the large cast delivers most of the lines without flinching straight into the camera, the plot puts together a series of incidents without giving sufficient information about the background for those who are not familiar with it, painting the entire picture in black and white, the good guys versus the bad guys, in what is ultimately a rather rudimentary approach.

The final conclusion, strongly supported by the final titles, speaks of the oppressively grim conditions imposed on the Turkish press (the close relation between the word “press” and “oppression” on one hand and “pressure” on the other is underlined) and quite a few references are made to less valiant media than Ozgur Gurdem, who thrived by bending down and cooperating with the authorities. As information, all this is very valuable, as cinema it still needs to be worked on.