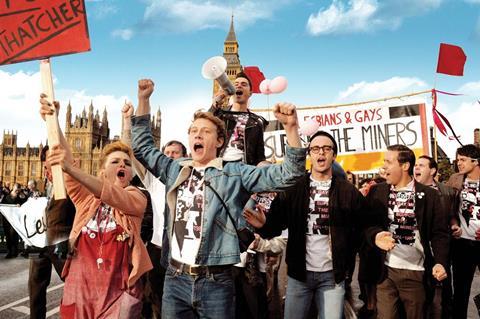 The long dispute between the  Margaret Thatcher government and the National Union Of Miners in the 1980s fostered bitter divisions and left national wounds that have never entirely healed. Part of the huge appeal of Pride is the way it salvages crumbs of joy from that legacy of crushing defeat.

Pride is a breezy, assured handling of true events and doesn’t leave a dry eye in the house.

Pride is a rousing, irresistible celebration of the alliance forged between striking miners and lesbian and gay activists who found common ground in their shared history of oppression. A big-hearted tearjerker that packs a huge emotional wallop, the film has all the hallmarks of British crowdpleasers like Billy Elliott and Calendar Girls. Enthusiastic word of mouth will be the biggest marketing device for a film that appeals across the board from a generation who will invest in bittersweet nostalgia for the battles of their youth to a younger demographic won over by the humour, humanity and the impressive ensemble cast.

Pride is undeniably corny and predictable at times but any detached appraisal of its flaws and virtues tends to be swept away by the well paced, assured storytelling. Following the London Gay Pride March in 1984, Mark (Ben Schnetzer) decides to raise money to support the striking miners. He forms Lesbians And Gay Men Support The Miners (LGSM). The fund-raising efforts are wildly successful but no organisation seems open to accepting support from a gay group.

They make direct contact with a mining village in Wales  and the village representative Dai (Paddy Considine) ventures  to London to express his thanks. A reciprocal visit to Dulais Valley is arranged and the stage is set for prejudices to be challenged and unlikely friendships to begin.

Stephen Beresford’s screenplay manages to maintain the broad sweep of the story whilst also weaving through various personal journeys of change and transformation. The characters all well-served by a flawless ensemble cast that includes Ben Schnetzer (almost unrecognisable from The Book Thief) as the charismatic leader Mark, George Mackay as Joe, a young man taking his first steps out of the closet and Andrew Scott as Gethin, the owner of Gay’s The Word bookshop who has not set foot in his native Wales or spoken to his mother in 16 years.

The film does acknowledge the darker side of what was happening at the time with nods towards the troubling role of the police in the dispute, the growing visibility of the AIDS pandemic and elements within the Welsh village who resist and resent the arrival of gay people bearing support.

Award-winning theatre director Matthew Warchus has waited fifteen years to return to the cinema after his disappointing film debut Simpatico. Pride is a breezy, assured handling of true events and doesn’t leave a dry eye in the house. The vocal and prolonged roars of approval after the Cannes world premiere are a sure sign of its popular appeal.