EXCLUSIVE: First still from Berlin Competition drama based on the classic wartime novel. 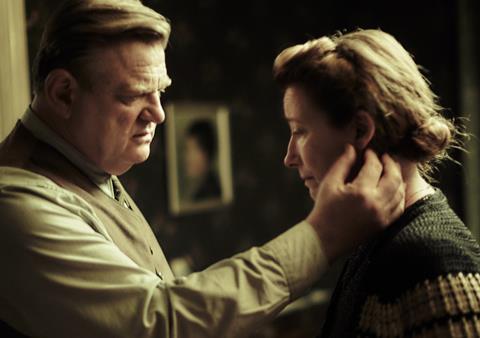 Based on the true story of a working class couple who conducted a series of anonymous protests against the Nazi regime during the Second World War, Emma Thompson (Saving Mr. Banks) and Brendan Gleeson (Calvary) star alongisde Daniel Brühl (Rush).

Hans Fallada’s classic 1947 novel centres on Otto and Anna Quangel (Gleeson and Thompson), who live in a shabby apartment block during trying to stay out of trouble under Nazi rule. But when their only child is killed fighting at the front, their loss propels them into the German resistance.

They start to drop anonymous postcards all over the city attacking Hitler and his regime. If caught, it means certain execution. Soon their campaign comes to the attention of Gestapo inspector Escherich (Bruhl), and a deadly game of cat-and-mouse begins.

But the game serves only to strengthen Otto and Anna’s sense of purpose, and slowly their lives and marriage are transformed as they unite in their quiet rebellion.