Venice: Why 'Brimstone' producer needed "balls of steel" and how it helped 'Game Of Thrones' 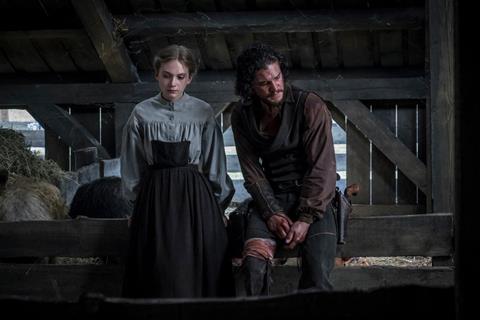 Listen to Vandevorst’s own account of her seven year journey to guide Koolhoven’s €12m revenge western to screen and you quickly get a sense of what he means.

Koolhoven first started talking about the project (starring Guy Pearce, Dakota Fanning, Carice van Houten and Kit Harington) when he was making his Dutch language Second World War film, Winter In Wartime (2008). At the time, Vandevorst warned him that he was too busy with his current projects to devote any time to it.

Winter In Wartime was a box office hit in the Netherlands but didn’t have the international festival exposure that the filmmakers had hoped. However, Vandevorst encouraged the director to be as ambitious as possible. She and the director had formed their own production company together, N279 Entertainment (formed in 2010).

Koolhoven cites Charles Laughton’s Night Of The Hunter and Sergio Leone’s Once Upon A Time In The West as key influences on his ideas for a western. Early on, he had contemplated working from someone else’s screenplay. British producer Mike Downey offered to act as a go-between with US writers and Vandevorst briefly thought about setting up the project as an American film. In the end, though, Koolhoven decided to write the film himself and Vandevorst resolved to make it in Europe.

“It was hard, especially since I hadn’t written in such a long time. It was a multi-layered, complicated script, so it took over three years,” the director recalls. He was writing in ‘Dutch English’, with the help of Sam Garrett, a much respected US translator based in the Netherlands. British script editor Kate Leys also advised Koolhoven on how to tweak the structure.

The Brimstone script received a very warm reception. Vandevorst says it immediately got under her skin, although she was startled by its darkness and violence. Early on, the Netherlands Film Fund rejected the project but Doreen Boonekamp, the then new head of the Fund, reversed the decision and agreed to support the development. This enabled Vandevorst to start the development process. Even so, she remembers, there was still widespread scepticis that she would be able to raise the budget required for a film of this scale, especially given that Koolhoven wasn’t a big international name.

Vandevorst insisted that the film couldn’t be made for less than €10m, a huge amount relatively for a Dutch movie. “It was bluff in a way,” she says now. “I didn’t have a clue on how to raise this €10m with a director who was not Paul Verhoeven.”

She knew, though, that if she tried to make the film for less, it would mean scaling down the project and making compromises, not least in the casting. “I am as ambitious as Martin. I always felt I was going to show people it was possible. I didn’t give in.”

It helped that Vandevorst had worked as a co-producer on Zentropa projects and had seen at first hand the brinkmanship of the maverick Danish producer, Peter Aalbaek Jensen, in putting the budgets for Lars Von Trier movies.

There were to be enormous setbacks along the way. Actors Mia Wasikowska and Robert Pattinson both dropped out prior to shoot. Vandevorst talks of late nights spent making frantic calls to agents, checking on cast availability. Then, only a few weeks before shooting, the original German partner Babelsberg pulled out and the funding threatened to unravel altogether.

“I thought: ‘It’s over, I will have to let it go.’ I had so many obstacles.” She had already spent a lot of money and was contemplating the grim prospect of bankruptcy.

“I wasn’t ready to give up,” the Dutch producer recalls. At her lowest point, with her back to the wall, Vandevorst received a call from another British producer, Paul Tribijts, who told her of his passion for the project and brokered an introduction with Uwe Schott and X-Filme (who came on as German partners.)

There were also some happy accidents along the way. Game Of Thrones star Kit Harington was about to go on holiday when he was approached about taking a role. He cancelled his holiday plans. From his point of view, and from that of Game Of Thrones producers HBO, appearing in Brimstone turned out to be a useful marketing ruse. It helped convince many fans of the series that Jon Snow (his character in the series) was indeed dead. Why else, the fans asked themselves, would the actor be taking other roles?

Dakota Fanning had been high on Koolhoven’s original list to play the female lead two years before - and she was the ideal replacement for Wasikowska.

In the end, Brimstone was made with money and support from many different sources - Backup Media in France (who helped structure the financing), New Sparta Films in the UK, Belgian tax shelter financing, Dutch public support, German money and backing from French distributors The Jokers. London-based Embankment is the sales agent.

The cast is international. Shooting took place in Hungary, Austria, Spain and Germany. The film spans four different seasons and is epic not only in its production., but also its length, spanning 148 minutes. Nonetheless, it was a point of principle for producer and director that the film retained its Dutch flavour.  All the key crew positions were taken by Dutch heads and technicians. Koolhoven and Vandevorst were able to retain final cut.

Now, the film has a prime slot in competition (on Saturday) in Venice and will then go on to TIFF where it is predicted to provoke strong competition among US distributors.