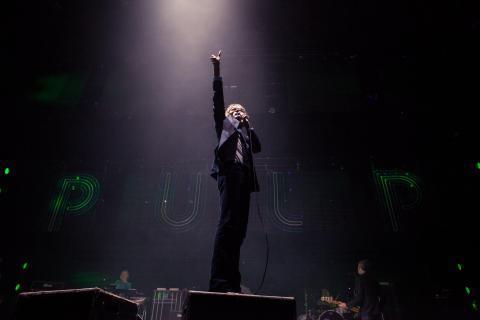 The subheading for this enjoyable documentary about British band Pulp is ‘A Film about Life, Death & Supermarkets…’, and while in truth there is little actual debate about life, death or even supermarkets this is a film that relishes and revels in that rather delightful truth that Pulp have a great and gently profound relationship with their fans, and most especially those from their hometown of Sheffield.

Jarvis Cocker is a genial and charismatic front man, sporting a suit, large dark glasses and an engagingly unkempt beard he offers an unusual cheeky bookish wit to the music world.

The core themes of their rightly famous song Common People are what run through the film, as it reveals the deep and very real affection the people of Sheffield have for the band and how the city had a formative effect on the band’s music and lead singer Jarvis Cocker’s lyrics in particular. You can take the band away from Sheffield, but you can’t take Sheffield away from the band.

It is perhaps a niche music film – the band are well known in certain territories – but also on the reveals its story with a good deal of charm and gentle insight. The film premiered at SXSW.

In 1988, following a disastrous farewell show in their hometown Pulp moved to London in search of success. Some 25 years – and 10 million album sales – later, they returned to Sheffield for their last UK concert. The film, set against the backdrop of that concert, interweaves interviews – and some rather deftly staged tableaux footage – with the band and their loyal fans.

From newspaper seller Terry and fabric store worker Josephine through to the loyal fans from around the world who wait outside the Sheffield Arena concert venue in a freezing cold night the film dwells on band and their songs about real life, ordinary issues and common people. While the engagingly gangly and always gently surreal Jarvis Cocker is very much the lead character, the other band members get a little time up front (though in truth possibly not enough – one of the film’s failings is that we rarely get a deep sense of the other members, which is a shame as it is clear they also have stories to tell) as they share screen time with the fans.

Jarvis Cocker is a genial and charismatic front man, sporting a suit, large dark glasses and an engagingly unkempt beard he offers an unusual cheeky bookish wit to the music world. His interviews are funny and insightful, and given that he shares the film’s ‘concept by’ credit with director Florian Habicht it is easy to see why he is very much centre-stage.

But the charm of the film is the very tangible relationship – and love affair – between Sheffield and Pulp. Habicht shoots a series of delightfully staged tableaux - in a café, with singing group Sheffield Harmony and with young dance group U-nique – as they offer their own artistic versions of Pulp’s music. The loyalty and sense of shared understanding between band and town is what gives the film its heart and soul.