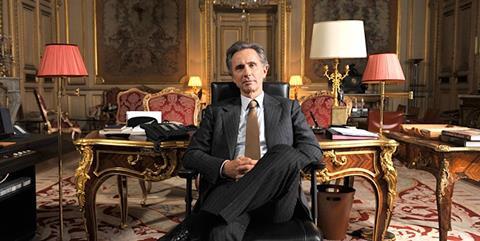 A merry-go-round spinning endlessly on itself, Bertrand Tavernier’s first outright attempt at comedy turns out to be a madcap political satire, a surprising departure of the veteran French director from the typically earnest tone of his earlier films, and much closer in spirit to something like the hit British TV series Yes, Minister.

Tavernier has produced a smart, often affectionate, caricature of people who are supposed to run this world.

Working on the script with the authors of the original graphic novel on which the film is based, Antonin Baudry and Christophe Blain, Tavernier’s take on diplomats and politicians is a kind of roman a clef, with French audiences doubtlessly identifying the Minister of Foreign Affairs and the persons of his staff who inspired the film’s various characters and will have that much more fun seeing their screen doubles.

This series of crises, intrigues, internal frictions and sudden impending urgencies constantly overlapping each other, may go on a bit too long for its own good, but next to the sarcastic portraits of harassed public servants chasing their own tails and exchanging masses of formulaic platitudes that raise serious doubts about their personalities, there are quite a few perceptive observations surreptitiously sneaked in to make the viewer stand up and suspect that after all, these people are not the hopeless asses they appear to be most of the time.

In his own way, Alexandre Taillard de Worms (a brilliant tour de force by Thierry Lhermitte), who is running the whole show, personifies the ideal French politician: handsome, quick-witted, well-educated, coming from an upper class family, preferably of noble blood, never at a loss with the right word, spreading pieces of wisdom he has picked elsewhere (in this case it is the Greek philosopher Heraclites) with the air someone who invented them, changing his mind ten times a minute but always for the right reasons, claiming he has strict leadership principles, such as “legitimacy, lucidity, efficiency”, but changing them more often than his socks, he rushes through the venerable corridors of the Ministry like a tornado, treating his staff  as “comrades” but never pleased with anyone else but himself.

Seen through the eyes of Arthur (Raphael Personnaz), a young graduate of the prestigious National School of Administration, who is taken on Worms’ team as a speech writer, the Foreign Affairs Office look as orderly as Alice’s Wonderland, packed cynical counselors working unwillingly round the clock and rubbing unfriendly elbows with each other, trying to please their master but never miss their lunch, secretaries trying to stay cool and keep the stacks of paper from flying up in the air every time the Minister bursts into their room. All of them under the supervision of Worms’ Bureau Chief, Maupas (Niels Arestrup in a masterful performance of restrained calm that barely hides a volcano about to erupt).

Packed with one-liners galore, rushing ahead like a runaway train, though there is no distinct goal in sight, repeating itself more than once but who cares at this pace, Tavernier has produced a smart, often affectionate, caricature of people who are supposed to run this world and decide its fate, who may be very keen on chasing the next Nobel Peace Award but don’t really care whether they always make sense.

Antonin Baudry, who wrote the text for the original graphic novel, had been on the Quai d’Orsay staff and therefore knows what he is talking about. The cast is nigh perfect - with a great cameo by Jane Birkin as a Nobel Prize poet visiting the Ministry - the editing is swift, the production design elegant and Tavernier manages the rare feat of driving them all breathlessly, at top speed, from beginning to end, without one moment of respite.