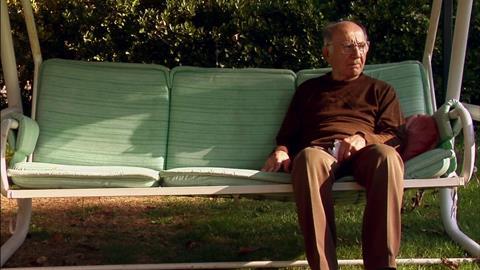 Noura Kevorkian’s deeply personal portrait of her father and the last days of his life in end-stage Parkinson’s Disease is an affecting and often beautiful story of a life lived with ambition and a disease suffered with grace. While the thread of its loose narrative – a final 23km trip down the Damascus Road in Lebanon’s beautiful Beqaa Valley – can sometimes be occluded by Kevorkian’s silent and impressionistic imagery, 23 Kilometres is a pervasive and thoughtful account of Barkev Kevorkian’s world as it fades out of focus.

23 Kilometres is a tough, sad, watch. His daughter’s camera witnesses Barkev’s physical deterioration in close-up and we watch his stumbling, painful attempts to communicate. A festival career seems assured after screenings in Karlovy Vary and Dubai, but wider distribution would be difficult, despite the rich nature of this production.

Kevorkian’s film starts with home video footage of Barkev’s last conversation before Parkinson’s took his power of speech away and it will be the last dialogue in this 78-minute film. Typically, as we will realise, he talks about the stars and the planets and their meaning in his life. It will transpire that amateur cosmologist Barkev was born to survivors of the Armenian genocide who had fled to the Karatina Camp in Beirut for shelter. He grew up in a shanty house with a tin roof, looking through the holes to the stars.

An auto-didact, Barkev first went to work at the age of 9. “I made big plans for my life,” he writes. Now he sees, “my factory decaying slowly into dust, all that remains of my life’s work.” The Civil War in Lebanon robbed him of 20 years in the prime of his life, and Parkinson’s has taken another two decades away from the man who once taught himself to read and write English so he could access physics books. He would built generators for the village made from blown-up tanks and spare car parts during Lebanon’s war.

23 Kilometres is silent, however: whatever slim exposition it holds comes from Barkev’s spidery hand as, robbed of speech, he attempts to write his thoughts in his journal which Noura Kevorkian puts in titles on the screen. And the viewer comes to realise that this prisoner of Parkinsons is a unique man, with much that is profound to say about life and its meaning as he begins to feel “the darkness engulfing me”.

Noura Kevorkian, who lives between Beirut and Canada, has fashioned a love letter to her father but also the land of her birth. She recreates the past through home videos, archive footage and actors who play her as a child and her father when he was in the fullness of life. These are blended with shots of the galaxy, of human anatomy, and of a ticking clock. Colours are vivid, her father silhouetted in resonant colour against the shade.