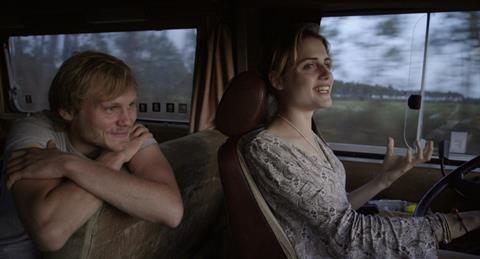 In another film, the premise of a single girl picking up a male hitchhiker would lead down an altogether more treacherous road. But in Hans Weingartner’s brightly-lit movie, it’s the starting point for a journey of romantic discovery which, while occasionally skirting close to darker issues, plays like a charming, if meandering, meet-cute road movie.

Contradictions and coincidences are leant on rather heavily in the screenplay

Weingartner is perhaps best known outside of his native Germany for 2004’s The Edukators which, buoyed by its Palme d’Or nomination and critical praise, enjoyed international distribution. 303 is unlikely to strike such a universal chord, although its charming leads and attractive visuals should secure further festival attention following its Berlin Generation 14-plus premiere. An overlong running time (this is a ’festival cut’ of a film which is also available at a shorter 125 minutes for the marketplace) will be the main stumbling block for distributors, but there’s much to enjoy in this intelligent tale of young romance.

303 (named after the model of the ageing Mercedes camper van which acts as the film’s primary setting) centres around Berlin university students Jule (Mala Emde) and Jan (Anton Spieker), who are both struggling to cope with life’s curveballs. An unplanned pregnancy by a unreliable boyfriend throws biologist Jule into emotional turmoil, while a missed scholarship and phone call from the Spanish father he never knew does the same for political science major Jan.

Jule decides to drive to Portugal to confront her boyfriend who is working there and, when she stops for fuel, bumps into Jan who is attempting to hitch-hike to Spain to meet his dad. Jule offers him a lift, and their conversation quickly turns to a debate about suicide, which upsets Jule so much that she unceremoniously dumps her passenger at the next exit. But they are thrown together at a later rest stop, when Jan saves Jule from the unwanted advances of a fellow traveller, and they decide to travel together once again

There are echoes of When Harry Met Sally in this premise of two strangers thrown together by a road trip, developing a friendship which threatens to spill into something more; a scene in which Jule describes a restaurant dish as ‘orgasmic’ could well be a nod to that rom-com classic. But 303 takes itself far more seriously, with the pair spending most of their trip debating such weighty issues as consumerism, war and drug addiction.

Listening to two 20-somethings, however attractive and insightful they may be, endlessly debate global socio-economics and ancient sexual impulses can prove wearing. Each time it begins to strain, however, their interaction shifts into something more light-hearted; a fully clothed dip in the ocean, a beachside barbecue. And, as Jule and Jan spend more time together, there’s a sense that all this philosophising is a smoke screen, that arguing about bigger issues is a way of avoiding more intimate conversations. As barriers begin to break down, and they (and we) get to know the real people behind the verbose posturing, their natural chemistry begins to work its magic.

Contradictions and coincidences are leant on rather heavily in the screenplay — Jule’s hippyish beliefs rub up again Jan’s cynicism at every turn, while her pregnancy is played for dramatic convenience — and the narrative sometimes stalls because of it. Yet the endearing performances from Emde and Spieker keep things moving forward and, as virtually the only two people on screen, they succeed in drawing the viewer into their journey.

Technically, 303 makes the most of its European settings, and cinematographers Mario Krause and Sebastian Lempe shoot the German, Belgian, French, Spanish and Portuguese countryside in lush, hazy detail that befits the dreamlike idyll of this burgeoning romance. Much is filmed in the intimate quarters of the camper and there’s a seductive sense that, although the responsibilities of adulthood may lie just over the horizon, the van is a cocoon from reality in which anything is possible.