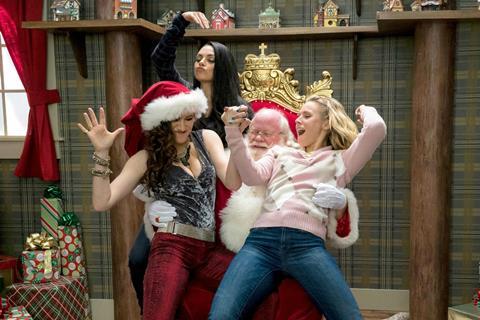 Like some holiday parties where the company is more fun than the setting, A Bad Moms Christmas fills the screen with enormously appealing actresses doing all they can to wring jokes from predictably raucous scenarios. This sequel to last year’s surprise smash Bad Moms again examines the challenges of motherhood — this time, by pairing the original film’s matriarchs with their long-absent moms, generating laughs from the anxieties that one generation of women inflicts on the next. The new film is hardly a comedic lump of coal, but the broad, sitcom-y material has inherent limitations that no amount of shameless, gleeful silliness can overcome.

The film overdoes its ribald elements or, alternatively, advocates a dispiritingly conservative and consumerist perspective

Opening in the UK and US on November 1, this STXfilms offering hopes to get a jump on the Christmas moviegoing season, reuniting original stars Mila Kunis, Kristen Bell and Kathryn Hahn while adding Christine Baranski, Cheryl Hines and Susan Sarandon. The question remains whether the 2016 original, which grossed $184 million worldwide, was a commercial fluke, or if audiences are ready for a second helping of R-rated chuckles so soon.

Chicago working moms and best friends Amy (Kunis), Kiki (Bell) and Carla (Hahn) are exhaustedly preparing for the onslaught of holiday season when their mothers arrive, unannounced, to join in the festivities. Each of these older moms exhibits their daughter’s personality even more intensely; respectively, Ruth (Baranski) is a type-A perfectionist; Sandy (Hines) is sweetly naïve; and Isis (Sarandon) is a drifter who’s never really grown up.

Writer-directors Jon Lucas and Scott Moore, who were behind the first film and wrote The Hangover, relish putting these characters in “outrageous” situations — like, for instance, when Amy, Kiki and Carla try to throw off the pressures they face as moms during the holidays by writhing all over a mall Santa. Too much of the humour of A Bad Moms Christmas is pitched at this level, aiming for cheap, oh-so-shocking laughs that hardly feel subversive. (The one inspired exception is a risqué, and sarcastically tender, meet-cute between the brash Carla and a hunky stripper who comes to get his privates waxed at her salon.)

This sequel is far funnier when it just allows these six actresses to hurl quips and digs at one another, which underlines the stress and family dysfunction that often go hand-in-hand at Christmastime. As with Bad Moms, the new film wants to shine a light on the ways that society forces mothers to be perfect saints who give selflessly of themselves, particularly during the holidays.

In this regard, Baranski’s hypercritical Ruth is a constant hoot, her every snotty, sometimes classist or racist barb glistening like jagged glass. But the jokes wouldn’t land as often if it weren’t for the actress’s brittle rapport with Kunis’ Amy, who sees her mom as a nightmare version of herself — and, to her horror, the woman who made her the person she is today.

That comedic tension runs throughout the film, and the older actresses nicely complement their younger counterparts. Sarandon and Hahn are enjoyably salty, while Hines and Bell both project a benign pleasantness. And when Sarandon, Hines and Baranski share time together on screen, their easy back-and-forth suggests why they might become friends.

But the likeable cast, seemingly savouring the opportunity to let the vulgarities fly and indulge in some bad behaviour, are ultimately stranded in a threadbare story. There’s a bittersweet irony at the heart of A Bad Moms Christmas — every harried mom is merely another mom’s little girl — and the sequel’s celebration of those complicated matriarchal bonds can result in some sweet and tart moments. But more frequently, the film overdoes its ribald elements or, alternatively, advocates a dispiritingly conservative and consumerist perspective concerning the season of giving.