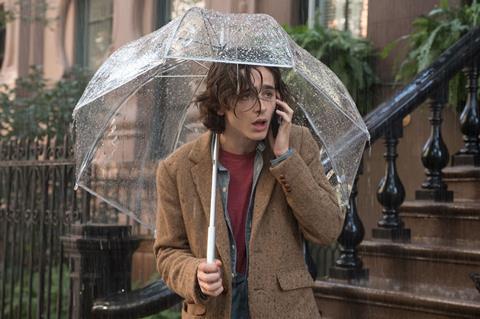 ‘A Rainy Day In New York’

Anyone shunning Woody Allen’s artistic output will be depriving themselves of a bittersweet comedy peppered with splendid performances if they give A Rainy Day In New York a pass. An endearing blend of madcap ingenue of yore and self-reliant young woman, Elle Fanning plays bubbly college student Ashleigh whose trip into The Big City with mopey Manhattan-raised boyfriend Gatsby Welles (Timothée Chalamet) doesn’t go as planned. Although the opening scene is rocky as the young couple discuss their travel plans, from there on in the film just continues getting better, juggling characters and situations in a manner that may baffle millennials whose idea of a movie is more MCU than MGM but will feel like home to viewers who have always enjoyed tuning into Allen’s wavelength.

Is it a masterpiece? Of course not. Is it worth seeking out on the big screen? Absolutely.

The spiral of pre-emptive rejection dogging Allen in the English-speaking world (Amazon declined to release this) is thus far less in evidence in the European territories planning theatrical releases, and Rainy Day opens the 45th-anniversary edition of the Deauville Festival of American Film in Normandy on September 6th before hitting French screens on Sept 18th. Mars Films, which has distributed all of Allen’s movies in France for the past decade, is restructuring to handle daunting debts but the company’s loyalty to the auteur, whose name comes up regularly in France across all serious media as affectionate shorthand for well-structured comedy — as opposed to alleged paedophile acts — should be rewarded.

Is it a masterpiece? Of course not. Is it worth seeking out on the big screen? Absolutely.

Allen makes fun of well-off people — including, in a late-arriving masterstroke, how some of them got that way — places a few excellent digs at privilege across generations, skewers the pitfalls of celebrity-obsessed lazy journalism and bundles more than one romance into a breezy one-weekend package, with and without rain, exquisitely filmed by Vittorio Storaro whose work on Wonder Wheel was alone worth the price of admission.

Ashleigh has scored an interview for her college paper with world-weary leading director Rolland Pollard (Liev Shreiber, a hoot) who offers her a scoop about his latest troubled production. Ashleigh cancels the romantic luncheon Gatsby had planned in order to get more background for the story from Pollard’s screenwriter, Ted (Jude Law).  Ted is a perfect gentleman although Diego Luna’s dashing movie star, Francisco Vega, is not.  When Ashleigh and Vega end up on the news, it’s a sly indictment of how unfounded rumours start, get blown out of proportion and pass for truth.

While writing and shooting this film, Allen had no way of knowing that Amazon Studios would back out of releasing it in theatres, something that makes a few of the director’s cultural observations seem prescient.

Gatsby stumbles across a high school classmate who says a guy they both know is shooting his student film nearby. Gatsby gets drafted into performing a short scene involving a kiss with Shannon (Selena Gomez), the sister of a girl he once dated. Gomez’ breezy self-assurance and down-to-earth demeanour are appealing.

The film has no qualms about demonstrating that older men can find younger women refreshing and a young woman can find certain older men, well, interesting. But what might qualify as sleaze factor here is actually practised more by women than by men. A cheating wife, an elder woman of means, a young woman with flexible morals. Only one male is an outright smooth operator textbook Lothario.

Gatsby wants to show his sweetheart the melancholy retro-Manhattan he loves. There’s no explanation for why Gatsby is forever tussling with fulfilling familial expectations — or is there? Oddly enough, while his performance is adequate, the usually irresistible Chalamet is the least compelling of the main characters.  In a late-arriving scene featuring a quietly-dazzling monologue, Cherry Jones as Gatsby’s mother certainly proves herself.

Allen’s speciality isn’t realism and neither is it keeping up with the times, and it’s difficult to insist that he gets with the programme and makes different movies than the ones he pretty much invented. Hit or miss, Allen’s a storyteller, and this outing is far more hit than miss.