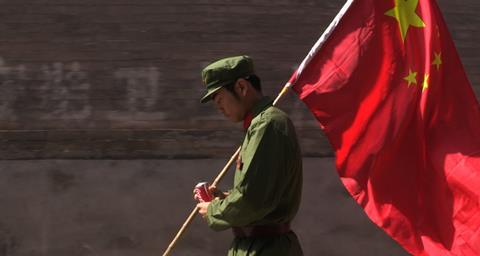 Du Haibin’s ethnographic documentary A Young Patriot follows the young Zhao Chantong, a 19-year-old boy from Pingyao, in Shanxi Province, Northern China, as he starts to grow up. He’s an ardent Chinese patriot when Du’s camera first finds him in 2010, walking the streets of Pingyao dressed in an old military uniform and brandishing the Chinese flag, noisily protesting the Japanese claims over Diayu Islands. Time, though, has a tradition of damping teenage enthusiasm, and so it happens with Zhao, as he begins to see his country clearly through the haze of nationalistic fervour.

He goes on a 15-day teaching programme in the desperately poor region of Liangshan near the Tibetan border, and begins to wonder about what, exactly, China’s prosperity is built on.

Du Haibin has delivered a frank and intimate picture of Chinese youth in A Young Patriot, marked by some attractive lensing by Liu Aiguo which push the film into artistic territory, in particular with static shots of Pingyao. A statue of Mao looks over the village silently, sealed in a glass box, as diggers tear up the ancient walls of the town, and the home in which Zhao’s aged grandparents still live comes under threat.

A Young Patriot seems destined to find its best audience in festival sidebars and as an educational tool. Du hasn’t attempted the scale of Fan Lixin’s Last Train Home, but his intimate portrait of this young boy and his politics clearly illustrates the issues facing China today and it’s remarkably frank. Supported by, amongst others, the Sundance Institute, the Asian Cinema Find and the Corporation for Public Broadcasting, a Congress-backed body, A Young Patriot will be seen by some as having an agenda, and it will be interesting to see how this film plays out politically.

Du Haibin’s camera initially tracks Zhao on the streets of Pingyao, where the boy talks fervently of joining the army. “We have to turn our patriotic zeal into real action, in places like Xinjiang and Tibet,” he says. A keen photography student, he fails to gain acceptance to university and has to repeat high school, working as a doorman in a local hotel. By the time he gets roaringly drunk to celebrate his acceptance to Chengdu University, Zhao’s revolutionary zeal is already slipping. He’s been borrowing money.

His 21st birthday party sees him on a university field trip in Guilin, and Zhao has already become more sophisticated and less of a country bumpkin – looking like any other Asian student, despite his penchant for dressing head to toe in army fatigures. He goes on a 15-day teaching stint in the desperately poor region of Dialiangshan, Sichuan, near the Tibetan border - a place he previously wanted to police - and begins to wonder about what, exactly, China’s prosperity is built on.

By the time his family becomes embroiled in a messy fight over compensation in Pingyao, Zhao is already beginning to rethink things. “What is real patriotism? It’s very broad,” he muses. Before finally admitting: “It all seems so complicated.”