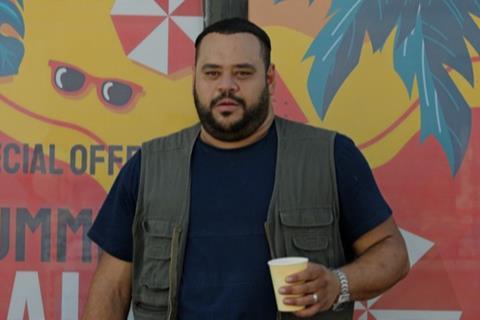 A veteran trucker returning to the highway and a young apprentice on his first trip provide a contrast in experience and attitude in Abu Saddam, Nadine Khan’s second feature after Chaos, Disorder in 2012. This intriguing, finely honed drama initially promises a combination of road trip and odd couple pairing before developing into a full-blown portrait of toxic masculinity and its destructive power. The attention-grabbing subject matter and commanding central performance from Mohammed Mamdouh should gain the film international traction following a world premiere at Cairo, where he won the Best Actor prize for his performance.

Abu Saddam (Mamdouh) considers himself a King of the road. A sweaty, blustering, hulk of a man, he has a high opinion of himself and his abilities. This is his first job as a truck driver in some years, for reasons we will only discover later. He is clearly in his element back in the driving seat, on the road again. His truck is his world and production designer Assem Ali picks out the little details that personalise it from the bobbing toy on the dashboard to the prominent photo of a loved one.

Hassan is his new helper. He is the one required to check the oil and water, watch out for hazards on the road, grab a headset if the mobile rings or generally make life easier for the driver. Ahmed Dash plays him with a bouncy eagerness, displaying the excitement and nerves of someone keen to learn at the side of a master. He is attentive to Abu Saddam’s needs and sits wide-eyed as he is he regaled with stories. It is only as their journey unfolds that we discover how much he flatters to deceive.

At first, Abu Saddam seems to have some affinity with Steven Knight’s Locke (2013). The truck hurtles along sunlit desert highways stretching as far as the eye can see. The action is mostly confined to the cabin, interruptions came from constant phonecalls and the boastful conversations between Abu Saddam and Hassan. Abdel Salam Moussa’s cinematography captures a sense of the tight space the two men occupy but it never feels claustrophobic. They also have a window on the changing world that is passing them by. Close-ups on a perspiring, sometimes preening Mamdouh allow him to use an array of snarky, sideways glances to convey his character’s exasperation with Hassan. He berates him for throwing an empty coffee cup from the truck window. ”The road is our daily bread, don’t throw trash on it,” he warns, lulling us into the assumption that he has some saving graces.

There are enough distractions and detours along the way to keep the audience engaged in the dynamic between the two men. Everything is designed to slowly open up the story, from a road rage encounter with a young woman to a decision to drop in on a family wedding. Saddam is very much old-school, especially in his dealings with wife Karima who is never seen but is the object of many a bullying, controlling phonecall.

Nadine Khan maintains a firm grip of the pacing and intentions of a story that seems designed to humiliate Abu Saddam, strip away his delusions and reveal all his pitiful inadequacy. Stopped at a road block, he finds his friendly old contact has been retired for the past two years and nobody knows or cares who he is. An encounter with flirty wedding guest Nahla (Massour) leaves him reeling from her mocking attack, describing him as “scum of the road”. Abu Saddam’s anger management issues and sense of entitlement make him the architect of his own troubles but you almost start to feel sorry for him until another petty act of revenge or the next intemperate outburst.

Hassan is a more obviously sympathetic figure although he shares Saddam’s vision of himself as a player and irresistible ladies man and has his eye on the main chance. If the film rips away Saddam’s dangerous, misogynistic delusions it also provides Hassan with an object lesson in how not to behave. No matter the damage inflicted along life’s highway, Abu Saddam is the one who suffers most as a casualty of self-inflicted wounds.