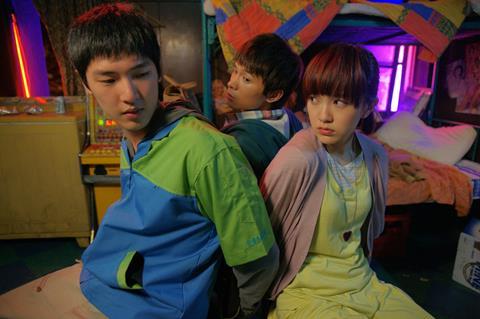 Asian-American director Arvin Chen’s boy-meets-girl romance coasts along on sheer goofy sweetness. A brightly-coloured Before Sunrise in Taiwanese screwball sauce with just a pinch of Umbrellas Of Cherbourg thrown in, it does little except charm, seduce and mildly amuse. But it does so with enough grace and storytelling skill to keep most audiences hooked though to the end, even though the sugar-rush wears off pretty soon after leaving the cinema.

The romantic, Parisian mood announced by the title is conveyed by a visual style that is all colours reflecting off rain-soaked downtown streets and warm light on faces

What does linger is the affectionate, magic-realist portrait of nighttime Taipei that the director and his crew create here. This and the presence of name stars including pop singer Amber Kuo will attract audiences across Southeast Asia.

Like Johnnie To’s Hong Kong, Chen’s Taipei has its roots in a strand of sixties European arthouse cinema that itself is a mashup of Hollywood noirs and musicals, so there’s a certain international appeal here as well, which could be boosted by the endorsement of executive producer Wim Wenders.

Sweet but directionless young Kai (Yao) waves his girlfriend off for Paris at the start of the film. When he’s not waiting tables at his parents’ noodle stall, he teaches himself French at the local book store in order to impress her. Kai’s calls to his absent paramour initially receive no response, but he does attract the attention of timid bookshop assistant Susie (Kuo).

When his girlfriend dumps him over the phone, Kai decides to fly to Paris, and in order to raise the money for the ticket, he agrees to courier a package for gangster boss and real estate shark Brother Bao (veteran crooner Frankie Gao).

Further complications are provided by Bao’s nephew Hong, played by Lawrence Ko in a comic register unrecognisable from his intense turn in Lust, Caution. Hong, a fussily fey trainee gangster, is attended by three hopeless sidekicks; all four wear garish orange suits. The other main character is career cop Ji-yong (Chang), whose investigation of Bao and his mysterious package is disrupted when his long-suffering wife leaves home.

The separate stories coalesce deftly in the film’s second half, when Susie and Kai bond as they are caught between gangsters and cops on the night before he is due to fly to Paris. A scene set at an open air dance class in a Taipei park provides a magical, skilfully handled moment of transformation for both of them.

The romantic, Parisian mood announced by the title is conveyed by a visual style that is all colours reflecting off rain-soaked downtown streets and warm light on faces. And the jazzy soundtrack is a delight: with its violin licks reminiscent of Stephane Grappelli and its cool double bass and drum breaks, it sounds as fresh as if it’s being improvised in front of the screen by a live quartet.

To sign up for Screen’s weekly Reviews Newsletter with all the week’s new releases, international openings and full festival reviews delivered free to your mail box every Friday, please click HERE