‘Bigger Than Us’: San Sebastian Review 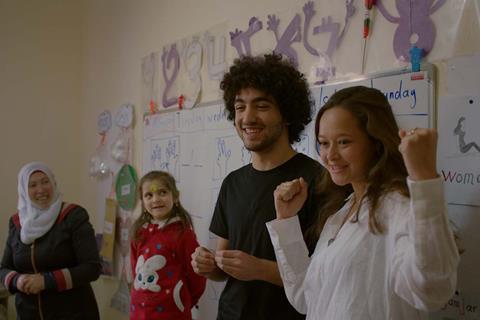 When she was 12 years old, Melati Wijsen started a campaign to ban single-use plastic in Indonesia. Now 18, she decides to travel the globe seeking to connect with fellow young activists who are committed to making their world a better place. Director Flore Vasseur’s document of those travels tends towards the simplistic and photogenic, but is still a handsomely assembled compendium of inspirational tales that emphasise hope and positivity. Bigger Than Us should find a welcome from documentary channels and festivals, especially those showcasing environmental concerns.

Vasseur begins on the Greek island of Lesbos, where Melati meets up with Mary, a photographer and volunteer with Refugee Rescue. As they chat in the sun and swim in the sea, Melati recalls the other people she has encountered during her road trip. That slightly clunky structure is the conduit to covering her meetings with fellow activists, starting with 18 year-old Mohamad in Lebanon who fled from Syria when he was 12. Six years later, he has established a school that provides education for 600 children.

In Malawi, 22 year-old Memory has brought about a change in the constitution to raise the legal age for marriage from 15 to 18. In Brazil, Rene was just 12 when he started his own newspaper, designed to challenge perceptions about life in the favelas. In America, 19 year-old “fracktvist” Xiuhtezcatl began his fight against “environmental racism” in Colorado when he was six. In Uganda, Winnie has fought against a system where women represent 75% of land workers and only 7% of land owners. “Female farmers will save Africa, “ she asserts.

A common thread throughout Bigger Than Us is the sheer scale of the challenge faced by a younger generation. The activists featured here are confronted by the growing impact of climate change, a global refugee crisis, the lingering legacy of colonialism and the stranglehold of patriarchal traditions. Brief footage of a speech by Greta Thunberg finds her lamenting the inaction of politicians who forever make the same fine promises and  then deliver precious little.

Vasseur underlines the feeling of a world in unprecedented crisis by providing a range of facts and figures from global sources (including the UN) on refugee numbers, the inequalities of land ownership, food insecurity, the number of journalists killed each year and areas that might expect to be underwater by 2050.

Rather than being overwhelmed by the world around them, Melati and her fellow activists are portrayed as beacons of hope. There is probably a film to be made on each and every activist featured here, which leaves Bigger Than Us feeling superficial. The film is a cheerleading call to arms and a celebration of idealism that never probes too deeply or provides any historical perspective.

Yet Bigger Than Us certainly looks good as it follows Wijsen around the world, basking in the warm sunshine and welcoming personalities along the way. There is a risk of appearing self-congratulatory and only preaching to the converted but there are also some images that cut deeper. Bantar Gebang is the largest uncovered landfill site in Southeast Asia, and the mounds of discarded rubbish look like a mountain range. It provides work for 22,000 people. Even more striking is a graveyard in Lesbos piled high with the lifejackets of those refugees who risked everything to flee the horrors in their homeland. These images alone bring home the urgent need for action.