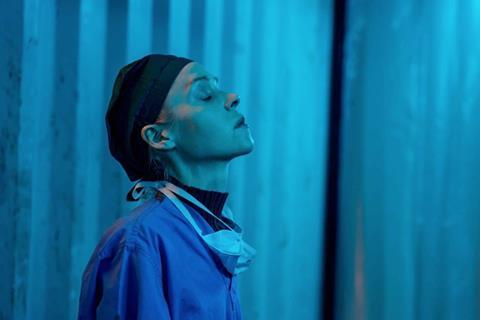 An enigmatic, almost otherworldly performance from Antonia Campbell-Hughes is the highlight of Colum Eastwood’s low-budget feature Black Medicine; her portrayal of a tortured black market doctor lifts what would otherwise be a standard thriller into rather more intriguing territory. And while the screenplay trades rather heavily on cliches of both genre and gender, the craft on display — most notably from cinematographer Angus Mitchell and composer James Everett — elevates this debut from the Northern Ireland director.

Screening at Galway Film Fleadh after bowing on UK digital platforms via Signature Entertainment on July 18, Black Medicine is likely to attract modest attention for its performances and slick visual style. The fact that it’s a female-driven narrative — something not often seen in the crime thriller — may also tempt some viewers, and positive word of mouth could help it find some traction.

One of those women is Jo (Campbell-Hughes) who, when we first meet her, is making her way to the top of a multi-storey carpark. Interrupted by an insistent phone call, she heads off to what we learn is her job; performing operations on criminals and illegal abortions for local women.

Eastwood (a 2020 Screen Star Of Tomorrow, as was Campbell-Hughes in 2011) shows confident restraint in his first feature-length screenplay, refusing to reveal too much too soon and allowing Jo’s situation to reveal itself through things intimated rather than explained; an uncomfortable tryst with her ex-husband Richie (Keith McErlean), the stocked drugs cabinet she keeps hidden in her immaculate apartment, the family photographs she can’t bear to look at. Eventually it’s made clear that she is grieving the death of her 13 year-old daughter three years prior, has been struck off from her profession as an anaesthetist — for undisclosed reasons, but likely to do with her habitual self-medication — and makes her living working for local criminals.

It’s through this work that she meets Bernadette (Orla Brady), a wealthy underworld boss whose daughter Lucy (Julie Lamberton) desperately needs a heart transplant. Bernadette asks Jo to help with the “off-the-record” operation involving, she says, a donor who is currently on life support; while Bernadette’s manner is pleasant, Jo is given little choice about her participation. When terrified homeless teenager Aine (Stranger Things’ Amybeth McNulty) stows away in Jo’s car, however, saying that she has been kidnapped by Bernadette, things take a dramatically different turn.

You don’t have to be a super sleuth to work out how Aine fits into Bernadette’s plans, but that’s not the film’s motivation. Rather, it’s a slow-burn exploration of how Jo — a woman who clearly feels she has nothing left to live for — will approach the impossible situation she now finds herself in,

That both Jo and Bernadette are mothers — one grieving an unimaginable loss and one trying to prevent the same — makes for an interesting interplay between the characters. Yet while it may make for some arresting conversations, the fact that motherhood is the motivation for both of these women, and for the film itself, is also a major sticking point. On-screen female characters are often pushed to extreme lengths by their biological impulses and that’s the case here; there’s a certain air of disbelief about the increasingly unhinged actions of both Jo and Bernadette.

Despite this, Black Medicine remains an involving watch. Cinematographer Angus Mitchell paints Belfast in moody blues and sickly greens, his camera tightly roaming both the city streets and the landscape of unexpressed trauma that’s etched on Jo’s face. And the score, by James Everett, is intense and immersive, expertly deploying distortion, delay and reverb to highlight the confusing maelstrom of emotions that pulse through every scene.