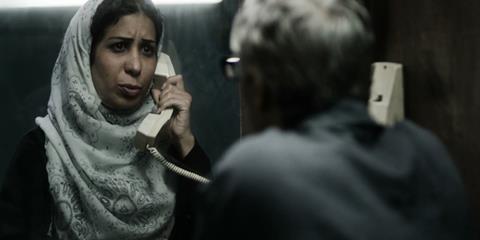 Ahmad (Ahmad Thaher), a builder with a sideline in under-the-table activities, finds himself facing the impenetrable maze of the Jordanian legal system when one minor crime catches up with him. Ahmad argues to the judge, to the arresting officer, to anyone within earshot that it’s a misunderstanding and that he fully intends to pay back the money he owes, just as soon as a little cash-flow problem has been ironed out. But the judge briskly seals his fate. “You were paid to build a wall. You didn’t build a wall. Three months.”

Episodic in structure, intimate in focus, the film sometimes feels like a list of male bonding moments

What unfolds over the course of this amiable but somewhat toothless film is the most benign prison drama imaginable. Director Mahmoud al Massad favours small moments of gentle comedy and human connection rather than the gritty conflict we tend to associate with the genre. Meanwhile, his protagonist shambles through the film in wry bemusement, occasionally dispensing a nugget of simple, homespun wisdom. It’s a sweet-natured crowd pleaser which should best connect with a local audience. Moments of charm notwithstanding, the film’s lack of a satisfying arc might inhibit its progress beyond the festival circuit.

Ahmad’s lovable roguish tendencies are established from the outset, with a nice little scene in which a botched attempt to syphon electricity from the neighbourhood power cables plunges his entire apartment block into darkness. He lies effortlessly to his wife (not so much a character, more a checklist of nagging spouse clichés) in order to get out of visiting her parents. Instead, he smokes, gambles and plays cards with his buddies on the roof.

He accepts his arrest, along with almost everything else that life throws at him, with a fatalistic shrug and a quizzically raised eyebrow. He is liked by almost everyone he meets, from the policeman who questions him about how to set up a facebook account, to the chief of his overcrowded cell. Grey haired, bespectacled and dentally challenged, Ahmad earns the nickname Old Man. But with it comes a respect that perhaps is lacking outside the walls of the prison.

Episodic in structure, intimate in focus, the film sometimes feels like a list of male bonding moments. The prisoners sunbathe and banter in the yard; they dance in their cell to Arabic pop on television. And the closest thing to a dramatic climax – Ahmad’s encounter with the man who is, indirectly, responsible for his current incarceration, is over in a brief scene.

Performances tend towards the broad, however Thaher, a non-professional actor whose real-life experiences inspired the film, brings an authenticity that goes beyond his alarming teeth. Soundtrack choices are the kind which will most appeal to the local audience. Further afield, the music, like the humour, might feel a little unsophisticated.