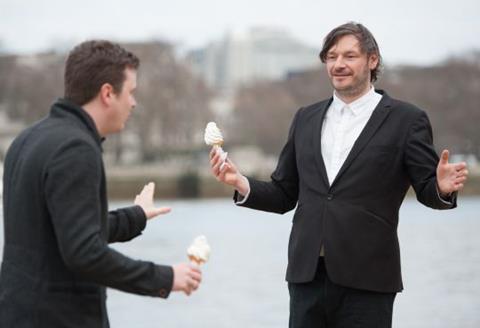 Shot on a tiny budget over a period of four years, improvised comedy Brakes explores the theme of falling in and out of love through the partings and meetings of nine London couples. This directorial debut of English actress Mercedes Grower is a labour of love that naturally encourages indulgence of its variable production values. But despite a smattering of admired names from TV and independent film, audiences may prove less indulgent of the feature’s scattershot – sometimes dramatic, mostly comedic – content, which doesn’t add up to anything terribly profound about the nature of modern love.

It’s fair to assume that the actor participants were not shown the improvised sketches of their fellow performers, resulting in a degree of tonal variation

World premiering at the Edinburgh Film Festival, Brakes is divided neatly into two, beginning with the partings. Two cringe comedy segments depict first the unravelling of Elliot (Julian Barratt) and Ray (Oliver Maltman), and later of Livy (Julia Davis) and Alan (Peter Wight). Very much played for uncomfortable laughs, the first sequence sees actor Ray’s Barcelona drunken one-night-stand track him down to the stage door of London’s National Theatre. Embarrassment levels rise a notch or two when actress Livy – whose ambitions evidently run far ahead of her talents – is caught in a lie by her older director boyfriend.

It’s fair to assume that the actor participants were not shown the improvised sketches of their fellow performers, resulting in a degree of tonal variation. That’s fair enough, and Brakes is capable of absorbing the poignant drama of Kerry Fox’s love-gone-stale contribution, as she bristles at the barely concealed contempt of her partner (Roland Gift). But at least a couple of segments feel they have been left in merely because exclusion would have offended the actors who gave up their time for free, and in any case they are all needed to reach the film’s slim 84-minute running time.

Around the half-way mark, at which point the series of uncomfortable adieus is beginning to feel rather inexorable, Brakes is in serious danger of wearing out its lo-fi welcome. So it’s with great relief that the film transitions to the couples’ meetings, or at least to an early moment in their romantic entanglements – Elliot and Ray are depicted the morning after their unlikely assignation, for example. It’s here that the structure begins to pay some appreciable dividends. While John (Steve Oram) and Maeve (Kelly Campbell) enact a fairly uninspired Skype conversation in the first half of the film, their meet-cute justifies the couple’s inclusion. Similarly, the worlds-collide meeting of pretty young fashion industry-ite Kate (Siobhan Hewlett) and charismatic builder Johnny (John Milroy) – filmed in NW5 hipster drinking hole the Southampton Arms – offers a nice twist on that particular pairing.

Tech contributions bring the US genre mumblecore to mind – although, to be fair, sound recording is not an issue. End credits include three names for cinematography, and seven for editing, a list that tells its own story of all-hands-to-the-pump filmmaking. Music compositions from artists including Quickspace and Sybil help to give the film more overall coherence, while the Buzzcocks’ 1978 hit “What Do I Get?”  – “I just want a lover like any other/ What do I get?” – offers an apt closing-credits finale.