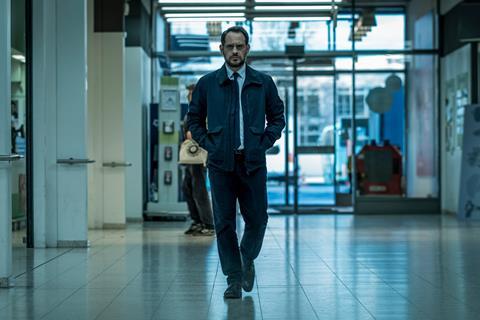 The directorial debut from Moritz Bleibtreu is a 4D maze of a picture which slips back and forth between alternate realities and is governed by quixotic dream logic. It’s a conundrum of a film which is not always easy to unravel; the lives (and possibly the deaths) of two men are linked through each other’s subconscious and a mutual acquaintance. But Bleibtreu’s commitment to unnerving atmosphere and the convenient intervention of a mysterious oneironaut (lucid dreamer) goes some way to guiding the audience through the tangled knitting of timelines and overlapping lives.

The look of the film gives a sense of submersion, disorientation and of diving deep into the subconscious.

Tricky and convoluted in approach, the film nods towards the work of Christopher Nolan – one of the characters even namechecks Inception at one point. But while Nolan has a fan base which is committed enough to watch and rewatch his work in order to iron out the kinks in the plotting, the knotty enigmas at the heart of Cortex might prove challenging to the casual viewer. Still, Bleibtreu’s name, both as a star and as the writer and director, should serve to raise awareness and draw audiences to the picture, which will be released by Warner Bros. domestically.

Bleibtreu plays supermarket security officer Hagen, a husband and father who is increasingly plagued by sleep disorders. His doctor is trying to persuade him to check into a sleep laboratory for a fortnight, but Hagen grumpily insists on pursuing life as normal – or as normal as it can be when the lines between sleep and waking, between reality and dreams, are blurring more each day. His relationship with his wife Karoline (Nadja Uhl) is suffering; she watches helplessly as her husband drifts away from her. Hagen’s dreams act as a portal into the world of another man, a small-time hoodlum called Niko (Jannis Niewohner) who, in a quirk of fate, forms a connection with Karoline when he visits her at her clinic. Soon, Niko and Hagen’s lives are overlapping to such an extent that even they are not sure who is who anymore.

It’s a film which leans quite heavily on “quirks of fate”. For instance, the chance encounter with a pharmacist (Nicholas Ofczarek, enormous fun in an over-the-top supporting role) who fills Niko’s heavy-duty prescription and then just happens to pop up on the train later, complete with a whole spiel about dream theory and the beliefs of the Achagua people of Colombia. It is he who suggests an Inception-style reality check to confirm whether Niko is dreaming or awake; he then lets out a blood-curdling shriek to give Niko’s “chakras a shake-up”.

Bleibtreu places a great deal of emphasis on atmosphere, perhaps at the expense of plot coherence. But this atmosphere is finely crafted and genuinely unsettling at times. Score and sound design work in tandem, employing horror devices to needle the audience into a state of anxiety. And the look of the film, with its aqueous, underwater colour palette, gives a sense of submersion, disorientation and of diving deep into the subconscious.