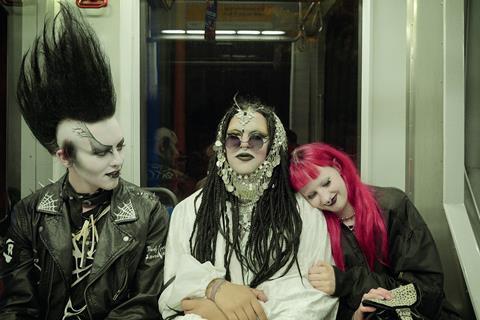 For girls like Josephine, who collects roadkill as a hobby and accessorises her outfits with nylon wigs, fairy lights and large chunks of metal through various bits of soft tissue, small-town life in Fjerritslev, Jutland was never going to be an easy fit. Her safety net is social media and her friendship with fellow Goths ‘Nightmare’, a gay, half-Pakistani designer and performer who lives for drama, and Jay, a bookish Christian with vertiginous hair and the loose aspiration of becoming a dentist. Frigge Fri’s playful and impressionistic approach to her documentary embraces the theatre that these three outsiders create to insulate themselves from an unsympathetic world. But a schism in the friendship, triggered by a new romance and new life, begs the question of whether, for all its freedom of expression and acceptance of difference, the Goth subculture might be just as unforgiving as any high school clique.

The Goth fascination with mystery, melancholy and a savage beauty which is tinged by death is well served by the film’s aesthetic.

With its skittish attention span and striking visuals, Dark Blossom effectively taps into the mindset of its subjects, teenagers who co-exist between the sleepy streets of their small towns and a vivid virtual world of their own creation. However the approach — a combination of fly-on-the-wall footage and extravagantly staged posturing — can only skim the surface of the psychological pain which is hinted at by all three of the teenagers. Even so, it’s an illuminating glimpse into a closed culture which boasts an abrasive energy and humour which should recommend it to further festivals, following screenings at both CPH:DOX and Hot Docs. The film’s festival appeal is unlikely to be limited to documentary events alone, however, and it could subsequently find a home on a streaming platform or with a specialist distributor.

Rejected by the other girls in school because of her reluctance to play handball and all the other social games that teenagers consider important, Josephine makes little effort to fit in. On the contrary, there’s mischief in her personality which delights in provoking a response. She proudly displays the mangled corpse of a pine marten, scraped from the roadside and wrapped in a carrier bag, then laid to rest in a freezer. Her plan is to boil the flesh off it, and to add it to her collection of animal skulls. The other kids eye her with distrust. But Nightmare (real name Mareridt) gets it. Together, trailing voluminous capes and teetering on platform-soled boots, they make a pilgrimage to the site of Josephine’s animal corpse collection, where the bodies of foxes and badgers slowly decompose under a plastic bucket. Together, they dream of escape from Fjerritslev, of meeting cool boys.

But when Josephine actually does meet someone — at 35, Jan is 15 years older than her, but with his turquoise-spotted peroxide crop, shares her taste for statement hair — tension in the bond between her and Nightmare rapidly builds. In a drama that plays out in recriminating text messages, the friendship shatters. And Fri’s film follows both, as the two lives which were so closely intertwined split into different paths. Josephine opts for cohabitation with Jan, and a job in the local Netto supermarket. Her taxidermy collection is replaced by Hello Kitty merch. And Nightmare writes venomous songs about his former friend which he performs to an electro backing track; he designs clothes and instructs his models to “act like your soul is being ripped apart” when they wear them.

There’s an elusive quality throughout — Fri eschews explanations, her footage is very much in the transient moment. Like the social media posts which pepper the picture, Dark Blossom is as much about the desire to project an image as it is about exposing the people underneath the black lipstick. But this, together with the heady shots of flowers and foliage which always seem to be just past their best and on the verge of rotting, is part of what gives the film its enigmatic appeal. The Goth fascination with mystery, melancholy and a savage beauty which is tinged by death is well served by the film’s aesthetic.

Production company: Made in Copenhagen