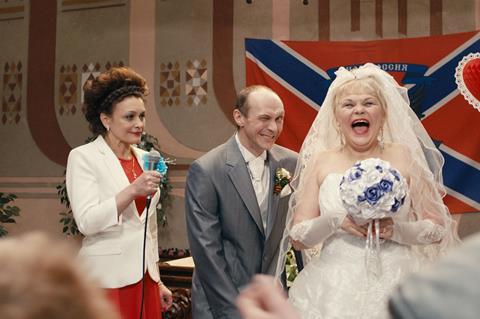 Industrious Ukrainian director Sergei Loznitsa has delved before into the murkier regions of human behaviour. But even by the standards of his caustic debut fiction feature My Joy (2010) or last year’s descent-into-hell drama A Gentle Creature, Donbass comes across as savage stuff. A sprawling black comedy with a vast ensemble cast, it evokes a chaotic state of social breakdown in the Donbass region of Ukraine, often with virtuoso brilliance, but it’s sometimes over-stretched vignettes can easily tax the overwhelmed viewer.

Donbass depicts a widespread confusion and violence at the expense of bewildered, exploited civilians

Loznitsa’s parallel career as a documentarist – most recently in this year’s Victory Day, about a Russian patriotic ceremony – means that his features often walk a teasing line between fiction and the pitilessly observed real. That’s again the case in a film populated by a cast which is apparently a mix of actors and non-professionals. The background is the conflict in Donbass between the Ukrainian regular army and a Russian-backed separatist militia. It’s not always easy to tell who’s fighting for whom, but that’s perhaps the point, as Donbass depicts a widespread confusion and violence at the expense of bewildered, exploited civilians. While it’s not necessarily important to know the stakes of the conflict, even so, perplexed viewers may feel excluded by the sometimes bewildering face-offs.

Working once again with star Romanian DoP Oleg Mutu, Loznitsa gives us thirteen sometimes elaborately staged, sometimes rather theatrical episodes based on real events, threaded in a La Ronde-style braid. In a pre-title sequence, people are being made up in a trailer to be extras in a film, or possibly fake vox-pop interviewees for a TV reportage. (In time of war, it’s not easy to know reality from appearance, as the extras will find to their cost in the final episode.)

We then see a meeting of officials interrupted when a woman dumps a bucket of faeces on the chairman’s head; a burly man, a politician or a gangster or both, soft-soaping the staff at a maternity hospital in a verbose tour de force; male travellers on a bus being harangued and menaced by a woman officer at a military checkpoint. A long sequence tours an underground hovel inhabited by refugees from shelling in the city; the film’s most brutal moment shows a lone soldier tied to a lamppost and left to the tender mercies of an angry mob out for blood.

These latter moments are painful and to the point, but elsewhere Loznitsa doesn’t know when to stop: a sequence showing a raucous wedding under the flag of the confederation of Novorossya goes on relentlessly and its grotesqueness suggests that Loznitsa’s eye for human baseness is all but crossing the line into a more overt contempt, which doesn’t work to his satiric advantage.

Certainly, Loznitsa’s black humour belongs authentically to an established Eastern tradition (as in the writing of Gogol, or the films of Alexei German and Alexei Balabanov) and therefore may not click with Western tastes, which currently prefer a more forgiving form of humanism. But even in this perspective, Donbass often feels overwrought. The final sequence packs as a genuine shock, all the more so for being artfully understated – although the virtuoso choreography of the extended closing shot makes its point before the credits roll.

Like the bullets and bomb blasts that punctuate the narrative, Donbass only sometimes hits its target, but even so, it’s clearly the work of a director with an angry message to get across, in an idiosyncratically caustic way.