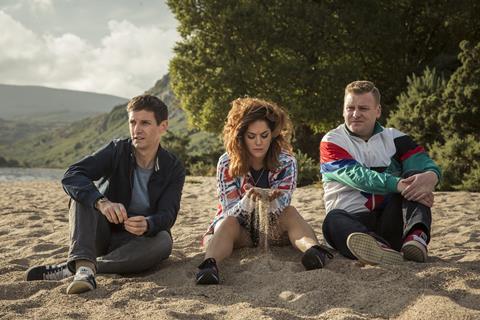 Surging through a drug-fuelled bank holiday weekend in 1990s Dublin, the film version of Emmet Kirwan’s successful stage play punches through on considerable charm and electric, adrenalised energy. Dave Tynan has made an exuberant and thoughtful debut about two brothers – one a wannabe DJ, the other a heroin addict street-sleeper - who reconnect in a chemical haze of 24-hour partying people, building up to a rave in the Wicklow mountains.

Dublin Oldschool hits an immediate chord with those who raved their way through the 90s and early teens high on life and whatever they could lay their hands on.

Exhilarating though it may be, and elevated by Kirwan’s poetry, the sheer speed of delivery and volume of dialogue coupled with strong accents and slang can make this Irish Trainspotting a – literally – semi-coherent trip, particularly during exchanges between the two leads. Releasing through Element domestically on June 29, strong local reaction should propel Dublin Oldschool to UK and festival exposure as an upbeat Adam & Paul. While there’s palpable potential for further international play, it may depend on how this issue of clarity is addressed.

Actor, poet and playwright Kirwan’s play was a hugely successful two-man show at home (transferring to the UK’s National Theatre in 2017) and both leads – Kirwan himself as pill-popping Jason, and Ian Lloyd Anderson as his sad-eyed smack addict brother Daniel – return for the film. Tynan, who directed Kirwan in his award-winning short Heartbreak, has also collaborated to take a co-screenplay credit, spilling the page out onto the streets of Ireland’s capital on one hazy summer weekend. Shot over 20 days and fully backed by the Irish Film Board to the tune of Euros 1.2m, Dublin Oldschool is brimming with new Irish talent, even if it’s occasionally unbridled.

Funny and heartbreaking in equal measure, Dublin Oldschool trips through ketamine holes, “floor drugs”, chemical-fuelled nights which turn into days which turn into nights again over the course of this lost weekend. In as much as The Commitments, directed – with accents – by the far more experienced Alan Parker, was tribute to every kid who’s ever been in a band, Dublin Oldschool hits an immediate chord with those who raved their way through the 90s and early teens high on life and whatever they could lay their hands on.

If mistakes have been made with the speed and surge of the piece, these are the errors of novice film-makers. There’s also a case to be made that smoothing out the roughness might have curbed the film’s enthusiasm and dulled it down. In a time when English-language cinema can come across as over-processed, this feels spontaneous and sincere - another riposte from the country which delivered The Young Offenders. Both lead actors, even if they’re not wholly comprehensible, are at ease in the parts fleshed out from the stage with locations and additional cast.

Actors Sarah Green and Seána Kerslake make a mark, with the luminous Kerslake given more to do as Jason’s estranged girlfriend. There are moving flashbacks to the brothers as young boys, long since parted by Daniel’s tragic addiction, but, wisely, these are small-scale and resonant rather than adding more characters or underlying motivation. Daniel’s caution that Jason is just one weekend away from addiction has a resonance which underscores the youthful hijinks. Based on parts of Kirwan’s own life, there’s an undeniable ring of authenticity, and some of the writing is memrorable.

Running time is spot-on for the content, while music supervisor Johnny Moy pumps the soundtrack with memories. John O’Connor delivers a graceful edit, production designer Mark Kelly travels through Dublin’s back streets, and DoP JJ Rolfe lights with flair, even though the “giant” Wicklow rave looks a little threadbare. It seems certain that Dublin Oldschool will be found by its tribe – who could have predicted that Once would go so far? – it’s just a question of when, and on what channel.