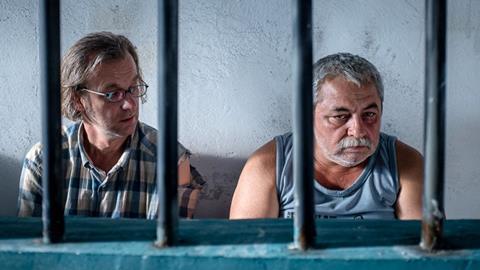 “Tell him he’s in Europe. Just not the good bit.” A jaded railway worker is trying to talk the latest stowaway from Mongolia out of a freight car, in this vodka-sodden black comedy set in Moldova. The country is portrayed as a disintegrating wasteland - buildings literally crumble before our eyes - in which everyone is clawing their way through endless levels of corruption to make a few meagre lei.

It’s telling that, although the film is set in Moldova, it was filmed in neighbouring Romania. The Moldovan film industry infrastructure is virtually non-existent and Moldovan director Igor Cobileanski, who studied at the Bucharest Academy of Theatre and Film in Romania, had to relocate the production in order to get it made.

This is an odd-couple road movie which follows the misadventures of Marian (Constantin Puscasu) a romantic musician who sings in a provincial choir, and the more worldly-wise and opportunistic Petro (Ion Sapdaru). Since the comedy is largely dependent on local familiarity, and Cobileanski’s acute ear for regional dialogue, this is perhaps not the kind of picture which travels well. Outside of its domestic market, it would probably play best as part of a speciality festival or showcase of new voices from Romania and the surrounding regions.

The tone is abrasively cynical; the message is that nice guys like the inoffensive Marian will invariably finish last. We first meet Marion when he sells a disreputable-looking moped in an attempt to raise the money for a business venture and is beaten down on the price to just 3500 lei. In a running joke, the moped reappears throughout the film, bought and resold at increasingly generous prices until someone finally pays 35,000 for it. Marian hopes that the business deal will see him solvent enough to marry his fiancee Veronica. Fat chance. Everyone he meets sets out to fleece him, and none more so that his ‘business partner’ Petro.

The production design goes all out on blighted desolation; the colour palette matches the stains on Petro’s sweaty old vest. But the music, a jaunty, slightly boozy refrain which always sounds as if it’s about to turn into a Tom Waits song, is upbeat enough to downplay the visual grimness.

Cobileanski revels in his characters’ worst impulses. Petro smokes budget cigarettes, known colloquially as ‘stinkers’. “If you are going to have a vice, let it be a cheap one,” he reasons. Later in the film, they meet a pair of drivers who drop vodka into their eyes so that the police can’t smell it on their breath.

The main problem here is that, although Marian is meant to be the hapless victim with whom we sympathise, his is the least developed character. He has a tendency to loiter around in the background while other, bigger performances fill the screen. And while the film argues that Marian’s inherent decency is an impediment to survival and success, you do wonder whether it’s more to do with the fact that he’s just not very interesting.