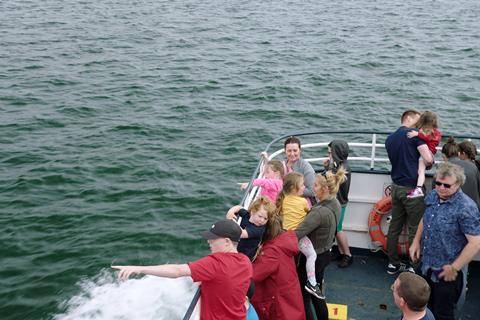 ‘Four Seasons In A Day’

The hefty consequences of Brexit are viewed with the lightest of touches in Four Seasons In A Day. Annabel Verbeke’s kaleidoscopic documentary vibrantly captures the human ebb and flow on a ferry crossing between Northern Ireland and the Republic Of Ireland. The anxieties, revealed in ordinary conversations, build into an unexpectedly moving portrait of belonging, identity and the threat of the great unknown. The cast of gabby, good-natured individuals, the wry humour, and handsome scenery combine to make this a very accessible title for audiences and streamers.

Four Seasons In A Day was made under the umbrella of Borderline, a six-part documentary series of border-crossing stories from across Europe. The setting here is Carlingford Lough in Ireland, where the regular crossings transport individuals, families, workers and tourists between North (County Down) and South (County Louth) in rain or shine. Brexit means that at the time of filming there is the prospect of a border somewhere in the water between a Northern Ireland that has left the European Union and a Republic Of Ireland which remains a member.

The notion of following the travellers on a regular ferry service seems unremarkable, but Verbeke shapes her material into something full of emotion and meaning. We witness a succession of day-trippers and holiday-makers heading to the Lough shore and a caravan park. Cute dogs rest on car windows. Babies yawn. A 30th birthday is celebrated with a surprise outing. A woman is off to meet friends for a round of golf. Friends idle away the crossing time by singing a song. It all seems carefree and unexceptional, and yet every conversation eventually turns to Brexit and what the imposition of a hard border might mean.

Verbecke sprinkles the film with a sense of what has changed over the period since the Good Friday Agreement and what might be in peril. One man flying a kite at the water’s edge explains to his son that he could never have done that at his age because the skies were filled with helicopters armed with machine guns. Protestant dad Marty tells his son that he couldn’t play with Catholics as a lad. “I didn’t know what a Catholic looked like…,” he reflects. “Same as you,” says the boy.

Individual stories provide pieces of a larger mosaic of Irish life as we witness the work of farmers, the lives of fishermen (Carlingford oysters are “the nicest in the world”), the rehearsals of an Irish dancing class on the beach, and much more. Children wise beyond their years provide a good deal of the entertainment value with their boisterous energy and lively conversations. There is even a running gag of sorts with constant references to a local dolphin called Finn who is much discussed but seldom seen.

Handsome views of the lough and the surrounding countryside add to the appeal, and scenes in blue-sky sunshine, thunder and thumping hail amply testify to the film’s title.

Four Seasons In A Day has echoes of Runar Runarsson’s Echo in the way it weaves little fragments of time and individual circumstances into a moving portrait of a community. This snapshot of a moment is all the more acutely felt in the light of the simmering unrest currently boiling over on the streets of Northern Ireland.