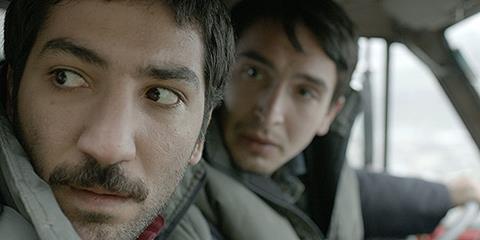 Following up his metaphoric and highly-praised Beyond the Hill (Tenepin Ardi), Emin Alper’s second feature Frenzy (Abluka) offers an even grimmer, more disconsolate portrait of contemporary Turkey, blunter, darker but far less satisfactory than his debut. Targeting the same audience as before, this time he will face a harder task in raising the same kind of enthusiasm for his story of two brothers living in the slums of Istanbul.

If this is a scary tale after all, it is thanks to Alper’s technical abilities as a film-maker

Digging deep into the sewers of the city to expose the sinister political system ruling the country at the present time, Alper finds in the complex relationship between two brothers (one a garbage collector, the other an exterminator of stray dogs), all the signs of a sick climate governed by violence, fear, suspicion and ready betrayal.

After serving 20 years in prison for an unspecified crime, Kadir (Mehmet Ozgur) is granted parole and sent to an anonymous Istanbul slum to collect garbage, but at the same time to smell out subversive elements to the best of his ability and inform the authorities.

There, he finds his younger brother Ahmet (Berkay Ates) living alone after having been abandoned by his wife and children, making a living by shooting the stray dogs which roam freely among the skeletons of the city’s many uninhabited skyscrapers. A third brother, Veli, disappeared ten years earlier, leaving no trace.

Alper clearly wants to convey his profound disenchantment with the country in which he lives today. Though the first part of his overlong 119-minute film seems promising, the lack of a solid script after a certain point sees the action stray into fantasy and imagination whose only contribution seems to be to confuse and distract the audience.

The parallels between Kadir and Ahmet are not very difficult to discern. Both are lonely and desperate to find some kind of solace;  they fulfill similar duties, cooperating with the establishment to eliminate “enemies of the state”, whether they are potential terrorists or animals on the loose. Each finds himself, at a certain point, fearfully compromised by his affection for those he is supposed to hunt.

Ahmet adopts a dog he didn’t manage to shoot dead while Kadir is ready to save his pretty neighbour, Meral (Tulin Ozen), a suspect in the eyes of the secret police who invaded her flat.

All around them, the town is in a state of siege (indeed, the film’s original Turkish title is “Siege”), explosions shake the foundations of the city and light up the sky, police cars patrol day the streets day and night. Big Brother is constantly watching.

But once the mood and atmosphere are effectively established, the script seems at a loss to decide which way to go. Verging between dubious ironies, fictional hallucinations and editing out of sequence to offer early warnings of things to come, Alper’s script may be trying to suggest that the anxiety and dread is partly imaginary, if terribly real for the persons concerned.

However, at the same time, he gradually loses control of his narrative and his characters and seems uncertain about which step to take next. Fantasy and fiction are mixed to such an extent it drains interest in the story itself.

If this is a scary tale after all, it is thanks to Alper’s technical abilities as a film-maker, which are never less than impressive. The imaginative combination of sound and music on the soundtrack, the somber lighting, the choice of locations and the casting of his two lead actors, both carrying deep furrows of existential anguish on their faces, clearly conveys his message. Istanbul is not a nice place these days, unless you happen to be a tourist.