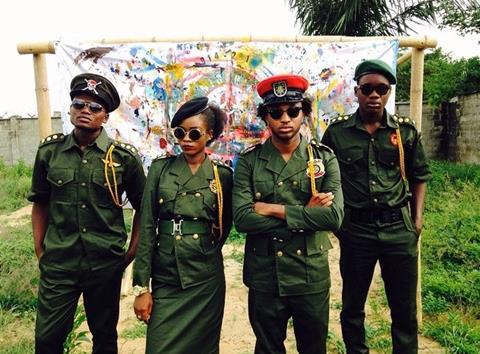 Nollywood cinema hits its mark with thrillers, melodramas and romances, at minimal cost and with minimal production values. In Green White Green (And All The Beautiful Colors in My Mosaic of Madness), Abba T. Makama gives us a rousing celebration and a satire of the phenomenon, with the same no-budget feel.

Much of the action seems barely rehearsed, which gives Green White Green the spontaneous feel that you find in Spike Lee’s early films and in the zany Be Kind, Rewind by Michel Gondry

You could call it Meta-Nollywood, as Makama mulls the many meanings of Nigeria and its multiple cultures. “The persistence of Nigeria defies the gods,” a professorial narrator warns us. There are plenty of laughs here as Makama’s cast fumbles through that mission, and Makama never lets production values get in the way of a gag or a grimace.

Green White Green will make the rounds of museums and art houses after its festival run, with panels of experts trying to make sense of it every step of the way. It’s also sure to have imitators searching for more comic truths in Nigeria’s history.

As Green White Green tries to do many things, it is essentially a film about a film being made. Three characters decide to make a movie – Uzoma (Ifeanyi Dike), an artist who splatters paint as a would-be Jackson Pollock of Lagos, is joined by friends Baba (Jamal Ibrahim) and Segun (Samuel Robinson) in that mission.

Other characters crowd in to meta-narrate the meta-project. They write about the Ibo tribe, defeated in the brutal Biafran War, and assess the mix of Ibo, Yoruba and Hausa cultures that reflects the principal tribes in a country that has many ethnicities. They’re an appealing trio as they trip over each other.

Much of the action seems barely rehearsed, which gives Green White Green the spontaneous feel that you find in Spike Lee’s early films and in the zany Be Kind, Rewind by Michel Gondry. The early Kevin Smith of Clerks seems another influence. There are jolting jump cuts, abrupt changes in light, and voices that are off-mike. Music ranges from a slow hip hop groove to the upbeat motivational Nigeria Will Survive  – i.e., it’s a Nollywood movie.

Yet its cast, like a vaudeville troupe, fills any technical gaps with personality, mugging to the camera and, in the case of Maggie (Crystabel Goddy), an addition to the trio, flashing a million-dollar smile in a production that cost a lot less.

Jokes are made and repeated about corruption, the military, huge class differences, and the snobbery of the nouveau riche – all good-natured. Yet just as the film’s editing can be haphazard, to put it mildly, Green White Green omits plenty of reality about the Nigeria that it’s seeking to know. Boko Haram’s zealots get a cartoonish send-up, yet we don’t see much about the lawlessness and armed rebellion in the toxically polluted Niger Delta. Anyone who’s sat in traffic in Lagos won’t recognise the near-empty highways and bridges as they’re shown here.

Green White Green is satire, and satire can’t be expected to be definitive, yet this is still a satire whose teeth aren’t terribly sharp. But it’s a film that puts a political conversation in a Nollywood frame. That’s a direction with much more to explore, and Nollywood has shown us that once a film ventures into new territory, dozens are likely to follow.