'Guardians Of The Tomb': Review 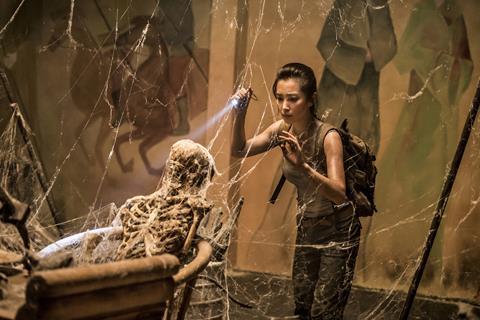 Guardians Of The Tomb

Considering that fear of spiders is so common, it’s surprising that few movies have utilized these panic-inducing creepy crawlies effectively. Frank Marshall’s fondly remembered comic thriller Arachnophobia (1990) arguably remains the king of spider features, with other efforts ranging from the straight-to-video schlock of Spiders (2000) and its sequel to the madcap parody of Eight Legged Freaks (2002). Arachnids now take a central role in Guardians Of The Tomb; a title change from its initial sinister moniker of The Nest signals how Kimble Rendall’s creature feature seeks to ape the balance between action-adventure tropes and mild terror that made the Brendan Fraser iteration of The Mummy (1999) so popular.

Li who maintains a sense of steadfast determination throughout

Assembled in a cut-price, homogenized manner with obvious concessions to various markets, this Chinese-Australian co-production may struggle to lure any particular audience into its web theatrically. Insatiable genre aficionados could, however, help it to spin a moderate profit on VOD.

The hurried set-up finds Jia (Li Bingbing), an Australia-based expert in venomous animals, being approached by biotech corporation CEO Mason (Kelsey Grammer) to assist with a time-sensitive mission; her brother Luke (Wu Chun) has gone missing while in search of a medical breakthrough in a desert region of China. They promptly set off with assistance from rugged search and rescue specialist Ridley (Kellan Lutz) who is haunted by an ill-fated posting in Nepal.

Mason’s employees Chen (Jason Chong), Milly (Stef Dawson), and Gary (Shane Jacobson) are along for the ride, but their respective skills only receive passing mention since these characters seem to serve mainly to meet co-production casting criteria or to guarantee a sufficient number of victims.

When a flash fire forces the group off the road and into an abandoned building, they have their first encounter with the flesh eating spiders that Jia identifies as the dangerous funnel-web subfamily only found in Australia. It transpires that this species is the product of an ancient form of genetic engineering with venom that is even deadlier than usual, meaning that Jia’s supply of life-saving serum is soon running perilously low. Seeking refuge underground, the group discovers a mythical hidden city, where innumerable spiders fiercely protect a well-preserved mummified Emperor from 200 BC whose obsession with extending his life led to the discovery of an incredibly potent elixir.

The cast makes little effort to elevate the rote material, aside from Li, who maintains a sense of steadfast determination throughout. With his motorcycle-riding entrance, the blandly handsome Lutz seems to be channeling Jurassic World’s Chris Pratt, but Ridley is the kind of beefcake action hero who only has two solutions to any life threatening situation – smash through a wall or set fire to everything – and Lutz doesn’t have the likeability to pull it off.

He also has no chemistry whatsoever with Li, although they aren’t helped by a screenplay with attempts at snappy repartee that have been lazily copy-and-pasted from elsewhere – “What took you so long?” she asks after he saves her from being crushed, only for him to retort, “Don’t you mean thank you?” Meanwhile, Grammer phones in his self-serving businessman, unwilling to summon up the enthusiasm to milk such clichéd howlers as, “Playing God? This is about becoming God!”

It’s all as daft as it sounds, which wouldn’t be a problem if the execution demonstrated some B-movie flair. Rendall enjoyed a surprise box office hit in China with Bait 3D (2012) which had sharks terrorizing a supermarket during a tsunami, but that Australian-Singaporean production made a virtue of its sheer ridiculousness. Guardians of the Tomb, however, takes itself far too seriously, aside from the woeful running commentary provided by the thoroughly expendable Gary as the team plods from one dusty spider-filled room to the next, a sense of repetition quickly setting in.

Although the enhanced arachnids are competently realized by Australian visual effects company Cutting Edge, they too often become just another part of the generally drab production design, since there are relatively few unsettling ‘money shot’ moments between the spiders and their squirming human prey. Rendall’s perfunctory handling of the set-pieces and jump scares means that even viewers of an especially nervous disposition have little to fear from Guardians of the Tomb, although those holding out hope for the future of China co-productions may find it makes their skin crawl.