'Hands Of A Mother': Tallinn Review 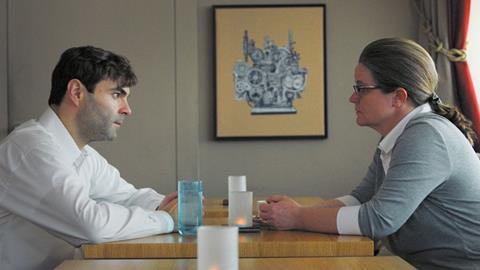 Tensions are already mounting during a family celebration on a riverboat when Markus (Andreas Döhler) has a sickening flash of a long-repressed memory. His mother, he realises, sexually abused him, and it’s only now that the thirty-nine-year-old husband and father is beginning to grasp the enormity of the events that his child’s mind shuttered long ago.

The most challenging decision is to have Eichinger play himself both as a troubled adult, grappling with unbidden memories, and as a child, wretchedly submitting to his mother’s abuse.

The third film in an unconnected trilogy of pictures dealing with domestic abuse (following Bergfest and Nordstrand), this represents a confrontational and daring picture from writer / director Florian Eichinger. The high quality of the performances - Döhler won the prize for Best Actor at Filmfest Munich - and the unflinching approach to a taboo subject should recommend the picture to festival programmers, particularly at events which have already shown the other two films in Eichinger’s trilogy. And although some stylistic decisions mean that the film’s empathy is kept at arm’s length, arthouse theatrical exposure is a possibility.

The most challenging decision is to have Eichinger play himself both as a troubled adult, grappling with the unbidden memories which threaten to wreck his life, and as a child, wretchedly submitting to his mother’s abuse. It’s not wholly successful as a device; despite Döhler’s committed performance, there is something rather jarring about seeing this hirsute man affect the mannerisms of a child. Given the nature of the scenes, however, it’s certainly easier in some ways to have them played out between two adults than to cast a child actor.

These scenes also contain one of the film’s more interesting devices - each flashback ends with a sudden fade to black which coincides with the sound dropping out. It’s a neat way to evoke the memory blackouts which have, until recently, dulled the pain of Markus’s childhood traumas.

Although the film is divided into chapters, each headed with the name of one of the key family members, Markus is the central character throughout. The first chapter - commencing with the deftly filmed party - is perhaps the strongest. The handheld camera flits through the crowd, delving beneath the polite veneer of small talk and capturing the ebb and flow of social discomfort beneath. As Markus’s wife Monika, Jessica Schwarz is particularly effective, conveying the mounting horror and certainty that life is about to change forever.

The revelations of abuse spread through the family like an aggressive cancer. But the more that Markus learns, the harder it becomes to process. Meanwhile Monika can’t view her husband in the same way, and the marriage starts to crack. Eichinger frames the couple so that there is never eye contact; both are continually facing in opposite directions.

But while the scenes between Markus and his wife have a dramatic potency, those he shares with his mother are less convincing. In the most difficult role, that of Markus’s mother, Katrin Pollitt struggles to convey the complex emotions of a mother forced to acknowledge her guilt of an unimaginable crime.