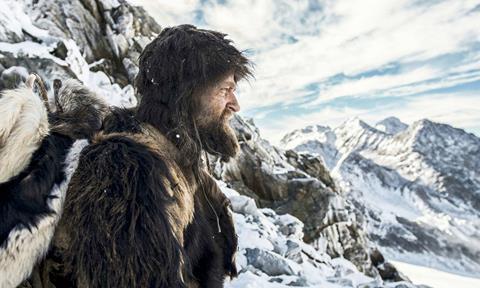 The final days of Alpine nomad Otzi are conveyed with all the rugged scenery and relentless drive of a classic western quest in Iceman. The third feature from writer/director Felix Randau is easily his most ambitious undertaking to date, relying on spectacular locations and pure storytelling to bring the distant past to life. There has not really been anything quite like it in the years since a Pathfinder (1987) or an Ataranjuat, The Fast Runner (2001), suggesting that novelty value alone could earn it attention and a commercial life.

There is no dialogue we would understand, the narrative itself is straightforward, and yet we do care and are convinced by the world Randau depicts

Otzi’s perfectly preserved body was found in a glazier in Italy in 1991. He was believed to have died some 5,300 years earlier.  Subsequent analysis of the corpse and DNA provided a treasure trove of information on everything from what ailed him -gallstones, apparently - to what might have been the cause of his death.

Randau uses some of that information as a starting point for a fictional portrait of  Otzi and what happened to him. Introductory titles inform us that the characters speak an early version of the Rhaetic language and that no translation is required to understand the story. It is a wise decision as even the best subtitles would break the spell of trying to imagine a Neolithic culture.

In Randau’s version of events, the lead character is Kelab (Jurgen Vogel), a hunter/gatherer for a small group living an idyllic existence. There are goats and pigs for food, furs for warmth and rituals that provide cohesion and community. When Kelab goes hunting, a small raiding party arrive, brutally killing everything in its path including his wife and son. The only survivor is a baby and Kelab carries the child with him as he sets out for revenge.

Filmed in Bavaria (Germany), South Tyrol (Italy) and Carinthia (Austria), Iceman does look impressive as Kelab is tested against the elements. Snowy mountain paths, blistering ice storms and lofty peaks provide the physical hardship. One striking sequence involves a swift descent into a crevasse from which there seems no hope of rescue.

Driven on by the desire to avenge his family and retrieve a holy shrine know as the Tineka, Kaleb’s journey is often violent but has its gentler interludes as he encounters the kindness of strangers along the way. When the violence comes it is swift,  brutal and decisive. This is very much an era in which only the fittest survive and few of them can expect an old age.

It is a credit to Randau that the film retains its grip. There is no dialogue we would understand, the narrative itself is straightforward and yet we do care and are convinced by the world he depicts. Jurgen Vogel’s presence as the grizzled, grief-stricken Kelab is a major factor in that conviction. There is more to the character than grief and rage. Even as he achieves his vengeance, there is a sense that it brings him no peace or respite from the loneliness of survival.