‘In The Strange Pursuit Of Laura Durand’: Sarajevo Review 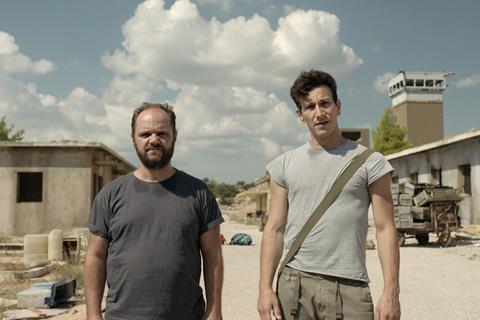 ‘In The Strange Pursuit Of Laura Durand’

To flee or not to flee?, that is the question in In The Strange Pursuit Of Laura Durand. Dimitris Bavellas’ whimsical buddy comedy follows two friends who respond to a rising tide of woes by embarking on an epic odyssey. Eccentric, playful but only fitfully engaging, it makes for an ambitious, meandering road movie that could struggle to make travel plans beyond the festival circuit.

Antonis (Makis Papadimitriou) and Christos (Michalis Sarantis) are a cut-rate Bill and Ted. Struggling musicians in the band Speed.28, they share a flat in Athens and are united by penury and a fondness for cheesy 1990s soft porn star Laura Durand (Anna Kalaitzidou). They cherish posters, news clippings, photos and VHS tapes of the woman who was once such a large part of their lives. Brief extracts of her work reveal Laura as a lingerie-clad fantasy object forever opening the door to a hunky handyman eager to fix her plumbing. The tameness of those scenes lend a sweet innocence to the proceedings.

The wonky tracking lines of VHS tapes are well captured and there is a technical polish to a film that features 8mm footage of Laura, fantasy sequences, Ghostbusters-style apparitions and the attractive depiction of sunny Greek locations.

Unfolding beneath chapter headings that include Never Trust A Hippy and Memories Are Calling You To Come Back, the odyssey involves a message in a bottle, a treasure map, strange encounters, dead ends and cruel deceptions. En route, Bavellas works hard to keep it bright and jaunty, using split-screen, deploying music with an echo of Morricone’s spaghetti western scores and building the story around comic set pieces that often fail to deliver. One detour to a yoga camp and a grand summer solstice ceremony feels flat. The one that sparkles is almost an homage to Mel Brooks as the bumbling duo’s great escape takes them to a gloomy old mansion. Thunder rumbles, lightning flashes, colour drains away as the film fades into black and white. The duo are met by sweet old lady Miss Virginia, gamely played by Yvonni Maltezou in best Cloris Leachman style. Her streaked Bride of Frankenstein hair-do and sharp comic timing add considerably to the fun. Her presence energises the film which becomes a much more appealing madcap romp in its final third.

It is this lack of consistency that prevents Laura Durand from really catching fire. Personal issues facing the central duo seem crucial to the plot at some points and inconsequential at others. It is almost as if Bavellas has thrown everything he can at the screen when less might have been more.