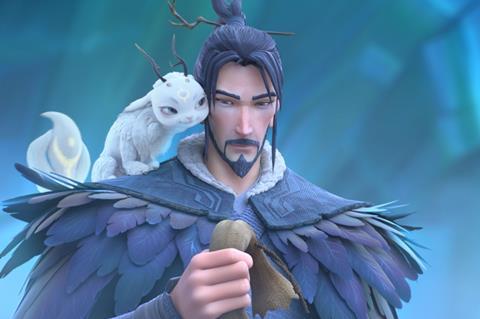 Emulating the Marvel playbook, this computer animated incarnation of the Chinese mythological figure Jiang Ziya was actually introduced in the end credits of the massively successful Ne Zha (2019) with both films being set in the same fantastical universe. Jiang Ziya, like Ne Zha, is adapted from the 16th-century novel “Fengshen Yanyi” (’Investiture of the Gods)’ but the two characters couldn’t be more different since Jiang Ziya’s stoicism is the polar opposite of Ne Zha’s hyperactive cheekiness. Although the life lessons of Jiang Ziya echo those of its predecessor, co-directors Teng Cheng and Wei Li have spared no effort to ensure that this highly enjoyable parallel story has a distinctly traditional aesthetic which befits its earnest hero.

Rescheduled from its Lunar New Year release when the coronavirus pandemic forced China’s cinemas to close, Jiang Ziya opened domestically for the similarly lucrative Golden Week period and grossed a hefty $152 million in its initial four days. Repeating the $720 million haul of Ne Zha depends on whether family audiences are sufficiently enamoured with the more serious tone to make repeat visits, but Jiang Ziya will surely rank as one of the year’s biggest local hits. Internationally, it is receiving limited theatrical runs in territories where a lack of familiarity with such dense mythology and a coronavirus surge will hinder interest. However, animation enthusiasts will seek it out on streaming platforms while it should become a valuable library title as awareness of the Fengshen Cinematic Universe grows over time.

This entry opens with celestial army commander Jiang Ziya (voiced with the upmost sincerity by Zheng Xi) rising to prominence during the Great War and poised to ascend to God status at Jingxu Hall. However, when tasked with slaying the nine-tailed fox demon Su Daji (Ji Guanlin), he realises that an innocent spirit is bound within her and is unable to follow through with the execution. Deemed to have fallen for an illusion by senior deities, Jiang Ziya is stripped of his immortality and banished to the mortal realm.

Ten years pass as Jiang Ziya solemnly reflects on his fateful decision. At a tavern, he meets a young girl named Xiao Jiu (Yang Ning) who steals a map in order to make the journey to Mount Youdu. She knows little about her past and is suspected of being a demon by the locals on the basis that she has fox-like ears, but is convinced she will find her father at the remote mountain. The sympathetic Jiang Ziya elects to accompany her only to once again encounter Su Daji on arrival at their destination.

Jiang Ziya is occasionally difficult for the uninitiated to follow, with reams of backstory squeezed into an exquisitely hand-drawn prologue and some perplexing reincarnation business later on. If narrative details get a tad cluttered, the animation is clearly designed throughout and often has a darker hue than one might expect from family fare. Environments such as the wintry landscape of Beihai, the ethereal Stairway to Heaven and an indigo coloured forest are strikingly rendered while fluid extended fight sequences featuring a plethora of special moves are balanced with contemplative moments against textured vistas.

In terms of character design, Jiang Ziya is sharply drawn with a perpetually forlorn expression which accentuates his self-doubt and has an adorable sidekick in Four-Alike, a small creature capable of transforming into a majestic deer. These appealing heroes are contrasted with the villainous Su Daji who is frequently animated in lithe silhouette, disguises her visage with a sinister opera mask and unleashes her fury from multiple blood red tails.

While the message about the importance of individuality here constitutes a rerun of Ne Zha, it’s conveyed in mature fashion rather than through scatological humour as Jiang Ziya is prompted to reckon with past acts of aggression and question his destiny. A particularly effective sequence shows the former immortal trekking through cities ruined in the very war that sealed his reputation where he is faced with the “resentful souls” of deceased soldiers, eerily illustrated as plumes of black smoke. A downside to this carefully etched redemption arc is that Xiao Jiu mainly serves as a motivational device despite her true identity providing an important plot point. She starts out as an agile, quick-witted heroine only to become rather helpless as the story progresses and her constant need to be rescued is a frustratingly repetitious element in a film that largely avoids such traps.

Impressively for a piece of foundation-stage universe building, Jiang Ziya manages to hint at a world beyond the frame without mitigating its individual pleasures. Much of the interconnectedness is saved for after the main storyline with one bonus scene in which Jiang Ziya’s Zen-like calm is amusingly tested by Ne Zha’s propensity for chaos over a messy Lunar New Year dinner. When it arrives, the inevitable team-up of the gods should be a real feast.