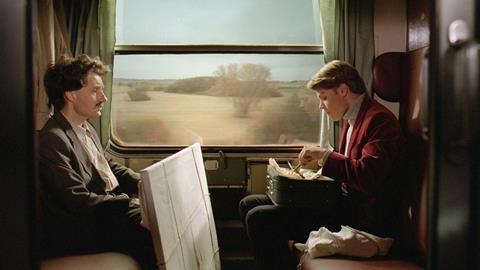 Journey to Rome (Cesta do Rima) marks the debut feature from young Polish director Tomasz Mielnik, who studied art in Poland and cinema at the FAMU school in Prague. It takes the form of a string of encounters which take place on a train trip to the Italian capital, all piled one on top of the other in an arbitrary fashion. Mielnik is not trying to tell a story, but rather provide a series of philosophical reflections on the meaning of faith, the chance for salvation, the essence of the law, religious rituals, and plenty more besides.

Mielnik’s picture drives relentlessly ahead, soliciting smiles and guffaws for a while but soon settling into too much of the same diet as the director goes on indulging himself

Looking like a sincere and very keen effort by a young apprentice to show how well he can use all the tricks of the trade, this disorderly mass of quotationsmay do well on campuses, where students and teachers will have a lot of fun chasing the sources which inspired the entire project. Farther than that, however, Journey To Rome’s commercial future looks questionable at best.

Mielnik hangs his film on the thin pretext of a plotline, a train journey to Rome undertaken by a mournful-looking museum watchman (Vaclav Hrzina) with a painting he has stolen from his former employers. In the course of his journey, all kinds of people drop in and out of his compartment to relate a series of intimate stories containing glimpses of cockeyed existential crises and then move on, to return every once in a while for yet another brief sketch.

There are eminent examples of similar structures, from The Divine Comedy (quoted in a pre-credits title) to The Milky Way (Bunuel seems to provide much of the inspiration behind the script) but Mielnik, who handles with gusto the visual colors of the tale, lacks the sharp wit that would spark more than passing interest in each of these encounters.

Pretending to look like an expensive project on a low budget, Mielnik sometimes unveils his gimmicks on purpose with a wink to show he is conscious of playing the game and willing to take the audience into his confidence. Journey To Rome is packed with religious innuendoes from water turned into wine, to the Devil and his minion trying to tempt St. Anthony and features countless priests and even a Cardinal (a cameo by the inimitable Zbigniew Zamachowski) who show a less than complimentary face of the church. Mielnik’s picture drives relentlessly ahead for a full 100 minutes, soliciting smiles and guffaws for a while, but soon settling into too much of the same diet as the director goes on indulging himself.

Given the languages used in the course of the journey, it would appear that the trip starts somewhere in the Czech Republic, passes by Vienna for a brief background musical interlude, and moves on to Italy, passing on its way a wine-growing county, but reaches no distinct final station. One thing is certain – neither the painting nor the thief gets even close to Rome.

To the project’s credit, the cinematography and the framing are adequately polished. Mielnik claims he has been inspired by Renaissance and Gothic paintings and his sets are indeed serviceable - if they look like sets and not the real thing, it can always be argued that this is all part of the joke. As for the special effects, they have the intentional antiquated feeling of cinema in the 1950s. Acting is mostly good-humored with Hrzina, on camera more than all the rest, never cracking a smile, like the eternal innocent he plays, walking to his doom without realising he’s being duped all the way.