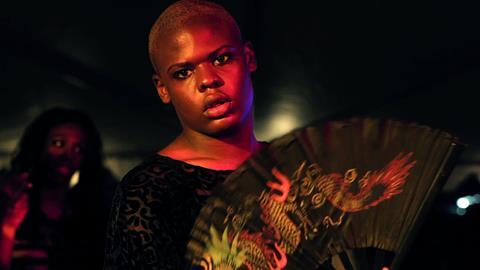 New York’s Ballroom culture – the bedazzle art of voguing – has been documented in both Paris is Burning (now a quarter of a century old) and the low-budget, entertaining fiction feature Leave It On The Floor (2011).  Kiki, though, mixes the glitter with a flat look at the reality behind the scene. The spangles and the in-your-face moves can sometimes obscure the heartbreak, discrimination and marginalisation of the majority black and mix-raced gay and trans-gender youth who have found their true home in New York’s ‘kiki’ community (a name which refers to the younger side of Ballroom).

There’s a good deal of bravery on display in Sara Jordeno’s documentary, which looks at the dancers and their ‘houses’, where young den mothers watch over their unruly flocks. The house system is a network and substitute family for kids who are often homeless, frequently in gender transit, and quite possibly HIV positive. Jordeno’s approach is candid and sympathetic, and asks some pointed questions, rather than sit back and simply enjoy the colourful fun.  This is a festival and TV title; the trick will be to persuade LGBT crowds, already familiar with the millieu, that there’s more in here.

Jordeno’s protagonists, captured still for the lens in repeated, affecting portrait shots, make some political points which will hit home. Homosexuality may be coming out of the closet for white folk, they say, but not boys who come from their ultra-conservative, often immigrant, backgrounds. There’s a blistering momentum here; these boys and trans-girls never stop dancing, moving, costuming, thinking of the next ball as they congregate on Christopher Street Pier to practice their poses.

But they’re very young, not far past puberty, and there’s a darker side to financing their lives, whether it be hormone therapy or HIV meds. Kiki points out that many in this documentary will already be working in the sex industry, backed into a corner because of society’s continuing reluctance to employ people like them. A lot of the kiki events take place in school gyms where there’s free HIV testing: “Know your status, girls!”. It’s not all glam but it certainly is, as they say, very ‘real’.

Jordeno understands that for every fabulously-named The House of Unbothered Cartier, The House of Pucci, or the House of Pink Lady, for every home-made ball outfit and in-your-face voguing session, there’s also a brave soul making their place in an unfriendly world, despite all the bravado (“I’m so great, you can’t be ashamed of me.”) If Kiki’s drive is to educate viewers, than it’s mission accomplished.

Co-written by young house mother and activist Twiggy Pucci Garcon and scored by Ballroom collective Qween Beat, Kiki traces this dance culture back to its 1930s roots at the Rockland Palace in Harlem.  There might be a suggestion that some of the marginalisation of that era has never changed, but while these kiki kids still meet with widespread rejection, there are also some strong sequences here where family members talk about their pride in their loved ones. Sad, proud, loud, funny, energetic and affecting, Kiki the documentary reflects accurately the spirit of kiki, the scene.