Drinks, sex and commentary flow freely over the course of one night in an Israeli bar 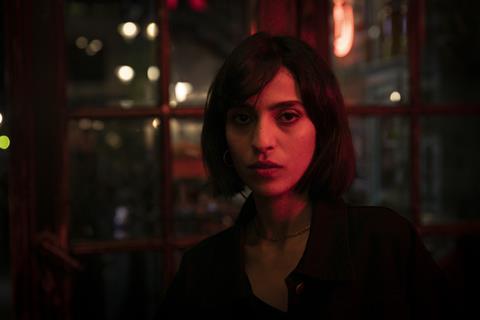 A bar in Haifa serves as a microcosm for the city as a whole in Amos Gitai’s somewhat heavy-handed allegorical picture. Over the course of a single night in the venue, we get a sense of a multifaceted and diverse community in which gays and straights, Jews and Arabs coexist, and which seems to have an unusually high incidence of risky and rather uncomfortable-looking extramarital sex. Theatrical, both in its single-location setting and its tone, the film manages to be simultaneously laboured but also oddly opaque.

The boldness of the impressive opening shot is not matched by the photography elsewhere.

The seventh of Gitai’s films to screen in Competition at Venice, Laila might attract additional festival attention on the strength of its focus on female characters set against a traditionally patriarchal backdrop. This is the kind of culturally specific ensemble portrait which can struggle to connect with audiences the further it travels from home, though, and certainly the humour is largely dead on arrival.

Inspired by an evening spent in the real-life venue, Club Fattoush (which also serves as the shooting location), Gitai assembles a group of punters who feel more like archetypes than characters. He opens the film with an ambitious single-shot take which takes in an assault and robbery of a man. A woman comes to his rescue, taking him into the bar where he recovers sufficiently for them to have precariously exposed sex. She is Laila (Maria Zreik), the Palestinian promoter of the gallery which is attached to the venue. He is Gil (Tsahi Halevi), the Israeli photographer whose politically charged prints are showcased in the opening exhibition. His work gets a mixed response. “When politics falls into the hands of amateurs,” warns Laila’s wealthy and much older husband Kamal (Makram J. Khoury), “it’s a dangerous thing.”

Laila gives her name to the film, but the focus drifts away from her to weave together the mini-dramas of four other women. Gil’s sister Naama (Naama Preis) turns up at the bar to complain that her husband is no longer sleeping with her, but ends the evening in a one-night stand in a parked car.

Khawla (Khawla Ibraheem) works behind the bar while her possessive husband toils in the kitchen. He’s pressing to have kids; she is more interested in a fling with Gil. Bahira (Bahira Ablassi) slouches around the place wearing a slinky one-shouldered dress and a sour expression, before trying to extort money from Laila’s husband. And Hannah (Hana Laslo) is having second thoughts about the blind date she just met.

The boldness of the impressive opening shot is not matched by the photography elsewhere in the film. The snaking camera spends a lot of time weaving drunkenly through the punters before loitering awkwardly on the edge of conversations. But it’s the writing which is the main issue. Gitai is using the bar as a device to explore bigger themes – the political backdrop, obviously, but also the role of art, cross-cultural relationships, privilege, protest, exploitation, suicide, domestic violence – and the film attempts to cover a lot of ground. It’s perhaps not surprising that it feels rather schematic at times.

But the stumbling block is that so few of the exchanges of dialogue register as anything other than just that – actors trading lines. Characters make statements which sound deep but ring hollow - “The time of great epochs is past” or “We give too much importance to too many things” - and then simply walk out of the frame. There is none of the wildfire crackle of actual living conversation. You don’t even get the sense that the people are listening to each other. And for a film about socio-political dialogue, that’s a real problem.