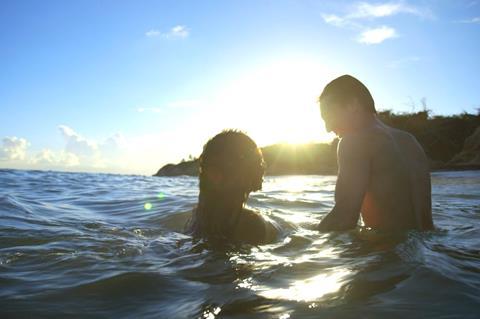 Category 5 Hurricane Maria hit Puerto Rico in September 2017 causing untold damage and loss of life. Landfall presents a persuasive case that the tragedy only deepend afterwards. Cecilia Aldarondo’s intelligent, insightful documentary captures how a natural disaster served to expose the man-made troubles that have blighted the island down the centuries. With it European premiere at IDFA, Landfall is enjoying a healthy festival run that only seems set to continue and expand.

Aldarondo’s skill lies in avoiding the obvious. There is no dramatic footage of the hurricane at full fury. There are only fleeting images of the thousands who took to the streets of San Juan in 2019 demanding the resignation of a corrupt administration. Instead, she immerses us in the life of the island, giving a voice to ordinary people processing grief and trauma. She also creates some telling juxtapositions in the editing to underline the gap between the haves and have nots, victims and exploiters of the situation.

Aldarondo and cinematographer Pablo Alvarez-Mesa appear to embrace the cliche of the American territory of Puerto Rico as a Caribbean island paradise. Lingering shots capture rugged coastline, deep blue seas and palm trees swaying in the breeze. The beauty and tranquility of the setting is firmly at odds with the personal struggles that they uncover.

Aldarondo ventures all across the island to capture little snapshots of individual lives and experiences. In Bartolo, the ruins of the Manuel Rojas Luzardo school have been reclaimed as housing for the displaced and a community space. In Orcovis, they plough the land with oxen and lament the drift from countryside to city in search of work. On the little island of Vieques, a family resolves to remain in a house that has been home for over fifty years.

The contrast with those seeking to exploit the island is stark. The vultures who view a crisis as a business opportunity fly in on private jets and propose the construction of gated luxury retreats for the wealthy. Motivational American speakers pitch the island’s “dream” tax rate of 4% whilst cryptocurrency entrepreneurs claim to have everyone’s best interests at heart. At least in public. Then there is an image of hundreds of bottles of water dumped in forests. Humanitarian aid is casually discarded on an island where homes have yet to be repaired, some people do not have running water or electricity and the government is seeking to impose budget cuts to help pay the  $72 billion of debt.

Aldarondo provides some elements of historical context, using archive material to detail the post-WW2 boom in factory construction on Puerto Rico. 21 factories in 1947 become 132 by 1951 as cheap skilled labour was employed to make everything from shoes and washers to radios and televisions. Colonialism has been a fact of life throughout Puerto Rico’s story.

Landfall has no commentary or narration but the combination of the poetic and the polemical speaks volumes. By the end, it is impossible not to share the angry frustration of the general population and to savour the brief glimmer of hope once street protests bring about the resignation of Governor Ricardo Rosello.