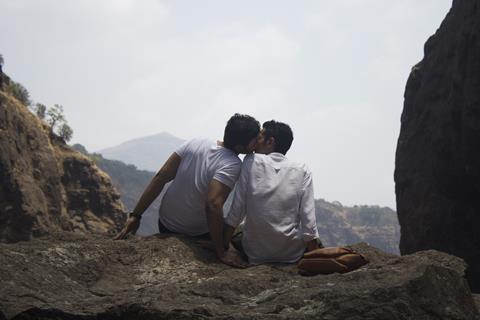 A wistful, meandering gay love story, Loev is very unsensational by the standards of LGBT cinema produced elsewhere in the world. But in India, where homosexuality is punishable by law, this gentle film is quietly revolutionary.

The taboo nature of the subject matter meant that the production was veiled in secrecy. The relative scarcity of gay-themed cinema from the Indian sub-continent (Aligarh is another recent festival title to address the topic), plus the interest in India’s burgeoning independent filmmaking scene should ensure a warm reception on the festival circuit after a bow at Tallinn’s Black Nights. Further theatrical prospects are less certain: pacing issues and a slightly inert central relationship take a lot of the passion out of Loev.

Aspiring musician Sahil (Dhruv Ganesh) fumbles for a candle to light the apartment he shares with his feckless boyfriend Alex (Siddharth Menon). Alex has forgotten to pay the electricity bill – the latest of many small crimes. Sahil is annoyed, and resents the fact that Alex gets to be the carefree, irresponsible one in the relationship. “I’m not your girlfriend and I’m not your mother. I don’t want to nag you,” he says, a little sulkily. But the showdown will have to wait, because Sahil has a weekend planned with an old friend. He shoulders his backpack along with his grudges and meets Jai (Shiv Pandit) at the airport.

Writer-director Sudhanshu Saria doesn’t explicitly spell out the nature of the past relationship between Sahil and Jai, but it’s clear from their flirtatious exchanges that they are more than just good friends. A handsome hot-shot young businessman based in New York, Jai has flown into Mumbai for a meeting about a lucrative real estate deal. But he is spending the forty-eight hours before the meeting with Sahil.

For his part, Sahil has dropped everything and planned a road trip to the picturesque Western Ghats. DoP Sherri Kauk captures the drama of the landscape, favouring plenty of wide shots showing Sahil and Jai hiking in uncomfortable silence.

Jai’s jet lag means that he is restless and awake while Sahil, beat from the long drive from Mumbai, crashes out on one of the modest single beds in their shared guest house room. But it is not just their body clocks that are not quite in sync. Sahil resents the fact that his friend can’t disconnect from his laptop and phone and simply enjoy their time together. Meanwhile Jai spends a lot of time staring longingly at Sahil and makes a couple of tentative passes.

Sahil gives out some pretty mixed messages, but repeatedly pushes Jai away before things get too steamy. Sahil suspects that, despite his protestations to the contrary, Jai is not fully comfortable with his sexuality.

The naturalistic acting style notwithstanding, there is something not entirely persuasive about the relationship between Jai and Sahil. More convincing is the bickering banter between Sahil and Alex. With his lean physique and limpid eyes, Ganesh is a charismatic presence on screen. Tragically, this was to be his last acting role. He died, age 29, from tuberculosis. The film is dedicated to his memory.