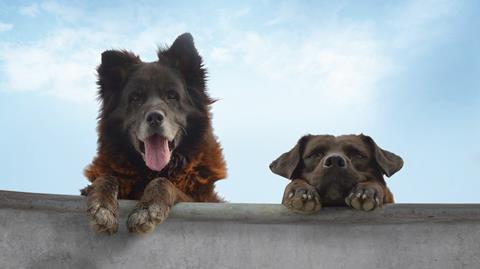 The lives of two stray dogs are brimming with interest and unexpected emotion in Los Reyes. Bettina Perut and Iván Osnovikoff’s laid-back documentary is a slow burner but has a hypnotic charm that animal lovers in particular will find hard to resist. Festivals will certainly be sniffing around an unusual piece that grabs a clever premise and runs with it.

Originally intended as a portrait of the people who inhabit the oldest skatepark in Santiago, Los Reyes sidesteps the sensitivities of camera-shy individuals by placing its focus on two inseparable dogs. Black labrador Chola and the older crossbreed Football are the uncrowned kings of the skateboard park. Whether slumbering, chasing a ball or just mooching around, they are their own masters. They are part of life in the park but also set apart from it. They might bark at a passing motorbike or a mounted policeman or play ball with a willing human but they are just as happy to slump in the shade and let the world go on around them, watching with indifference. That makes them perfect observers, overhearing the conversations of skaters and park denizens who were reluctant to appear on camera.

As the dogs frown, scratch or stare wisely into the middle-distance, the soundtrack is filled with snippets of intimate conversations between drug dealers, discussion of family problems and despair about what the future might hold. We never see the human faces but instead gain access to an audio diary of the Chileans who head to the park to skate, hang out, meet friends and share confidences.

Los Reyes demands that you adjust to the lazy, easygoing rhythms of the dogs’ lives. There is never any urgency for them and unvarying days can often merge into one. The camera takes an almost forensic interest in the dogs with extreme close-ups of lolling tongues, wagging tails, dripping snouts and twitching limbs as they dream the hours away.

They are unusually resilient and self-contained. Football is perfectly contented as long as he has something in his mouth to chew, whether that is a plastic bottle or a rubber ball. If it is sunny and hot, the dogs amble towards the shade or catch the spray from a sprinkler. If the rains fall, there are two kennels that offer them sanctuary. Humans share enough scraps of food to provide them with nourishment and there are ample sources of water around them.

The fact that the dogs need so little to make their lives complete is one of the understated lessons that run throughout the film. The gentle pace and quiet observation encourage a state of reflection. The film’s technical skills are impressive, from the acute sound design to the sharp editing. You can only imagine the patience and painstaking craft that were required to make such a coherent, structured and fluid work out of material that is seemingly so random.

Los Reyes does require patience and can risk seeming slight to the unsympathetic viewer but over time it grows into something rich and thought-provoking. The soulful expressions and close kinship of the dogs gives them real personality and leaves the viewer with a strong connection to them.