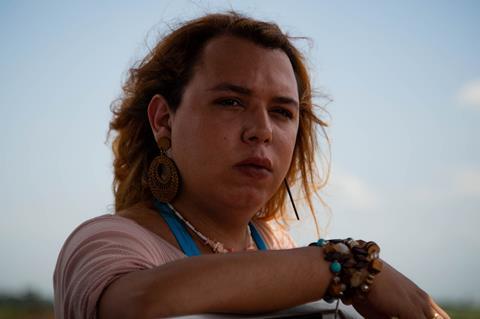 In a field full of soy plants which extends to the horizon and beyond, a flock of rheas picks its way through the crop, necks swivelling, alert to danger. A pair of industrial crop spraying machines trundle in the distance. And, not far from where the birds peck for food, lies the bedraggled body of a trans woman, Madalena. This assured debut from Madiano Marcheti tells us very little about Madalena, and nothing about her death or even the discovery of her body. And in adopting this approach, the film makes an unavoidable point about an ongoing tragedy in Brazil, which has the highest rate of murders of trans people of any country in the world.

With its saturated colour palette, vividly sketched vignettes and the co-existence of a banal reality with the hints of a supernatural element, this film has something of the heady appeal of Mati Diop’s Atlantics. Following on from its premiere at Rotterdam, Madalena should prove attractive to further festival programmer, especially those with an LGBTQ+ focus. And given that formally bold explorations of trans issues are still a relative rarity, it could find a home with a specialist distributor or curated streaming platform.

The film is divided into three distinct sections, each of which follows a character with some kind of connection to Madalena. The first is Luziane (Natalia Mazarim). She works on the door of a club and dances in hotpants in the soy field for a music video, scraping together a living in the hope that she might be able to pay off the cost of her motor scooter. Madalena owes money to Luziane’s family; after a couple of fruitless visits, Luziane enters Madalena’s apartment and, stepping over a single discarded shoe, takes a fist full of bank notes from the bag which lies on Madalena’s dressing table.

Cristiano (Rafael de Bona) enjoys a privileged existence. His family owns the vast agri-industrial concern which has consumed all the farms in the area. It’s on his parents’ land that Madalena’s body lies, a fact that Cristiano is keen to conceal, fearing its ramifications for his mother’s local election campaign.

Finally, there’s Bianca (Pamella Yule), a trans woman and a friend of Madalena’s. Together with a group of women, she packs up Madalena’s remaining possessions, reminiscing and paying tribute to her life. “Was she drunk? Did she forget where the toilet was? Yes, but she never stopped being a lady!”

It’s in this third section of the film that Madalena takes a ghostly form. But even when she is the topic of conversation, she is also a conspicuous absence at the centre of the film, which depeatedly drifts away from the fact of her death to follow the other characters’ day to day lives. Luziane perches on the kerb with a gal pal as peacocking boys pull stunts on their motorbikes; Cristiano buys steroids from a musclebound friend; Bianca banters with the elderly charge who is trying to beg a cigarette. The daily grind goes on. And the murder of a trans woman is a fact of life in this part of Brazil where, as the backdrop of industrial agriculture suggests, exploitation of people and recourses is everywhere.