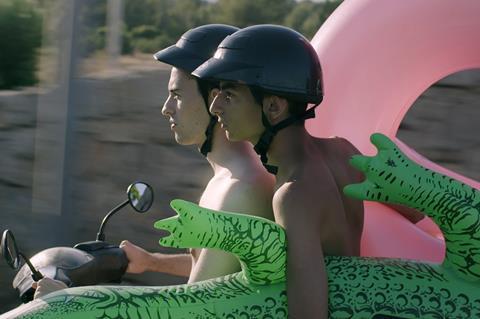 Of all the package tour destinations on the Spanish coast, it is Magaluf, a concrete playground on the southwestern edge of the Balearic island of Mallorca, which has assumed a near-mythic status. Its legendarily hedonistic reputation among the 18-30-year-old Brits who pile onto the Punta Ballena strip every night to lose their inhibitions, and frequently their clothes, is matched by its notoriety stoked by strident reports in the Spanish media. But what of the locals? Using a playful blend of documentary and fiction, Miguel Angel Blanca explores the conflicted relationship between the town that earned the nickname ’Shagaluf’ and those who make it their home year-round.

The Magaluf that Blanca paints is more than a place, it’s a capricious entity that demands a sacrifice

This is a familiar theme for Blanca, who explored the phenomenon of ‘museum cities’ in La Extranjera (2015), a documentary/science-fiction hybrid that captured the tourist influx in the city of Barcelona. The deliberately blurred lines between the real and the dramatised might limit Magaluf Ghost Town’s mainstream appeal, but the visual wit and boldly unconventional approach should recommend it to further events and organisations with a focus on envelope-pushing documentary filmmaking.

The lurching, undead stumble of the tourists, the skinny-dipping, the public sex acts, the screaming neon of the party strip — all of this plays out predominantly in distant wide shots, which has the effect of turning it into background noise. Instead, three characters are foregrounded. Maria, a widow with a taste for extravagant eyeliner and cigarettes, has recently been hospitalised with breathing difficulties. The doctor has warned that she needs to radically overhaul her fitness, or risk a dramatic and possibly final deterioration in her health. But Maria becomes emotional at the thought of a life without the comfort of cigarettes. Unexpectedly, however, she finds a confidante in her new lodger, Cheickne, a migrant worker from Mali who soaks up her gravelly monologue with a baffled smile.

Ruben is a student who lives his life as if on camera. Posing for portfolio shots — he wants to be an actor, but would settle for work as a model — he finesses his ‘diva’ face. He jokes that as a drug addict, a queer and a gypsy, he is unlikely to live long, but of all the characters in the film, he is the most respectful of the uneasy pact required to make a life in this town of deadly pleasures. But Magaluf’s wild side is seductive, and Ruben fantasises about the rich pickings that come from robbing one of the comatose revellers who litter the beach during high season.

And then there’s Olga, a Russian expat and a realtor with ambitious plans to clean up the town and rebrand it as a high-end tourist destination. She switches between rapid-fire Russian and English as she shows a pair of prospective buyers around a villa with a walk-in beer cooler the size of a Range Rover.

The fictionalised element permits the characters to enact their darker fantasies — and in the case of Ruben, these are dark indeed. Superstition is everywhere and, heightened by the sound design and a nervy score that wouldn’t feel out of place in a horror movie, there is an undercurrent of foreboding — the suggestion that something malevolent is feeding on the excess. The Magaluf that Blanca paints is more than a place, it’s a capricious entity that demands a sacrifice. This hint of the uncanny adds a intriguing flavour, but the real power of the film comes from more conventional elements: the photography is superb. With its stealthily revealing framing and eye for the indignities of holiday pleasures, it is at times reminiscent of the expressive candour of Martin Parr’s street photography.