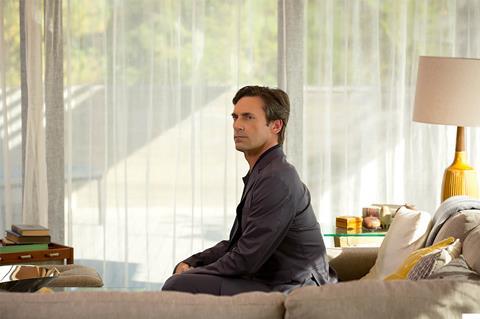 Marjorie Prime is both a sophisticated chamber drama and a captivating contemplation of time, memory and mortality. Following his 2014 film Experimenter, an inquiry into Stanley Milgram’s obedience experiments, veteran director Michael Almereyda (Nadja, Hamlet) has apparently found his niche as a storyteller of big philosophical ideas and complex inquiries into human nature.

A poetic, though admittedly esoteric piece of cinema which may cater to a small self-selecting audience, but one that won’t be disappointed

Intelligent, precise, and always operating just one step ahead of its audience, Almereyda’s latest will require very delicate handling by distributors, but should be able to draw in an older upscale crowd, both at art-houses and on small screens. It helps that Marjorie Prime boasts strong performances from Geena Davis and stage veteran Lois Smith, and pivots around an intriguing sci-fi premise.

Adapted from a play by Jordan Harrison, the film begins as 85-year-old Marjorie (Smith) speaks with a computerised version of her deceased husband, Walter, at the age of 40 (Jon Hamm). The initial conversation offers a template for the film’s investigations into memory: While Marjorie, now forgetful in her old age, struggles to recall her past, her holographic companion helps supply those memories but also seeks further information from Marjorie to fill in the details. Like Marjorie, he can only “remember” what he’s been told by his human caretakers.

With the entrance of Marjorie’s daughter, Tess (Davis) and her husband Jon (Tim Robbins), the family’s intricate relationships—and what they reveal and conceal about their past—slowly comes into focus, with one traumatic memory they prefer to remain unremembered. While such revelations are heavy, the script also lightens up the mood at times, as when Jon tells Marjorie after she’s had an accident, to “forget it.’ “I probably will forget it,” she jokes in reply.

The story’s subsequent turns are unexpected yet also structurally make sense within the world of the story. Without giving too much away, the film continues to utilise its sci-fi-like premise in deeper and more stimulating ways. It’s a testament to the source material that such seismic plot shifts don’t completely upend our investment in the story. Humans may come and go, but Almereyda’s bigger themes continue to fascinate, transcending even the need for his main characters.

Most obviously, Marjorie Prime is about memory, of how it’s constructed and how it’s fallible. But it’s also very much about death and the passing of our lives, with humans suffering from what the simulated Walter calls our “genetic inclination.” There’s nothing like the emergence of Hal-9000 in Marjorie Prime, but the film subtly conjures up the notion of our inevitable expiration date, whereas computer beings have “all the time in the world,” as they say.

Set in a single location, a rectangular modernist house that sits on the crest of a beach, Marjorie Prime exists, like its characters, largely in isolation. Though nothing else in the film suggests that it takes place in the future, the austere lonely house is an apropos setting for the near-future milieu. Clearly, Almereyda isn’t interested in expanding the play beyond its essential themes; rather than going outward, he stays inward, employing carefully composed arrangements of the actors within the house, along with the occasional intimate close-up.

To help move beyond the “theatricality” of the material, the film employs an evocative soundscape, from the ever-present crashing of waves in the background to Mica Levi’s mystical score and lyrical string orchestral compositions, both new (Richard Reed Perry and Bryce Dessner’s “Wave Movements”) and classical (a Beethoven string quartet). The ultimate result is a poetic, though admittedly esoteric piece of cinema, which may cater to a small self-selecting audience, but one that won’t be disappointed.