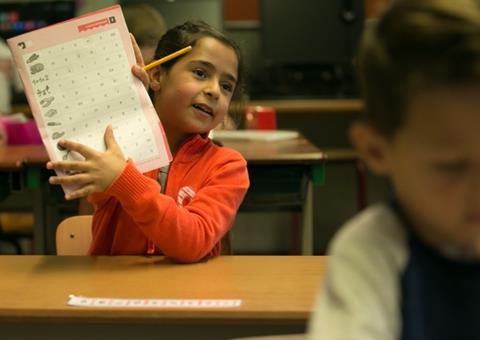 In a small town in Holland, in a clean and safe classroom, Miss Kiet Engels teaches refugee children. The camera drops to table-top height as their wide eyes adapt to a new life and a new language. Small things happen to small people as Miss Kiet establishes a safe place with clear and fair rules. Viewers searching for big drama will ultimately find it within themselves in Petra and Peter Lataster’s outstanding documentary, which quietly and confidently recalls 2002’s Etre et Avoir.

A patient, fair teacher – mostly heard and seen from the legs down at a young person’s vantage point – and spirited, yet spiritually hurt children from Syria and other traumatised countries is a potent and potentially charged combination.  The Latasters haven’t made that kind of drama, though, and Miss Kiet’s Children isn’t a statement of anything past hope and the virtue of patience. Miss Kiet listens to her children and tries to push them on; they in turn work hard to master their letters and their sums; similar tenacity on the part of the viewer reaps rich rewards by the end credits, although it’s very specifically a Dutch film, Miss Kiet’s Children has a potentially bright future in any market where patient audiences live.

The film is fascinated by seven year-old Haya, who starts the film in tears because she has fallen over and muddied her trousers. It’s clear she understands Dutch but speaks it poorly and wants Miss Kiet to call her mother; Miss Kiet is having none of it, and it quickly transpires that Haya is a bundle of contradictions. She wants to behave and get her butterfly stickers, but she’s bossy too and is quick to push tiny Syrian refugee Leanne around. Newly arrived Leanne, 6, is so small even the camera’s low position can’t quite scale her up to fit the frame. But she’s fiercely independent – a determined little girl who still jumps in fear when there’s noise in the playground.

During Miss Kiet’s Children the audience must guess as to the journey her wards have made to this classroom. This is most overtly expressed in the case of 10 year-old Jorj and his cowering younger brother Maksem who is so clearly traumatised and scared. Jorj tries bravado as a coping mechanism; he’s so distracted and sleepy it seems as if he must have some attention deficit issue and it takes all of Miss Kiet’s considerable firmness to get him to complete a task. It transpires, though, that the child doesn’t sleep at night for fear of bombs. She tries to get him to perform simple trust exercises, and he finds it almost impossible to look at himself in the mirror – the film’s saddest scene.

But Miss Kiet’s Children is all about hope and what can be achieved by one good woman. Under her guidance, her wards take teeny, tiny steps – how many times do they repeat the word “Moon”? -  but it’s evident these are amounting to something; by the time they all express their love for Macedonian child Branche - in Dutch - and dance to of Pharrell Williams’ Freedom on stage there shouldn’t be a dry eye in the house.  The Latasters rarely put a foot wrong - from their static opening shot in the town of Hapert to the final frames of Miss Kiet in her classroom, this is a beautifully-judged piece.