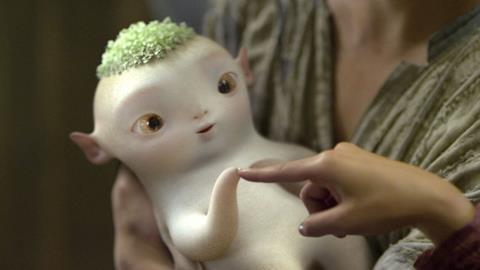 Former Dreamworks animator Raman Hui has scored a major commercial success on his return to Hong Kong with Monster Hunt, a polished fantasy adventure that blends broad comedy with period hijinks alongside first rate CG character work. Hui’s film broke China’s single-day record when it opened on July 16 and stormed past the RMB1 billion ($162.2 million) mark in just 8 days. But its uneven tone and wayward plotting could prove a bar to similar levels of success in international markets, despite its family-friendly tale of a baby monster being smuggled across medieval China.

Hui accomplishes an impressive degree of world-building in Monster Hunt, incorporating a menagerie of eccentric and intriguing characters to rival the best fantasy adventures.

Monster Hunt marks a homecoming of sorts for Hui, regarded as a major creative force behind Dreamworks’ animated fantasy series Shrek. A supervising animator on the first two films, Hui co-directed Shrek The Third, which still holds the record for biggest animated opening weekend in the US. Monster Hunt marks the Hongkong-born director’s live-action feature debut, as well as his first film made back on Chinese soil.

The story, set in an unspecified time in ancient China, involves foolhardy young village official Tianyin (Jing Boran) who becomes embroiled in a war between the human and monster worlds when he is inadvertently impregnated with the infant heir of the monster race. Joining forces with Xiaonan (Bai Baihe), a rookie female bounty hunter, Tianyin must escort his vulnerable offspring across the country to safety, while being pursued by a myriad of interested parties with more murderous intentions.

While keen to sell the infant, named Wuba, and make a name for herself, Xiaonan warms to the buffoonish Tianyin, and together they become surrogate parents to their tentacled ward. Inevitably she finds her calling defending Wuba against the likes of Jiang Wu’s seasoned huntsman, Wallace Chung’s fiendish official, not to mention a pair of incompetent monster royal guards, played in their human form by Sandra Ng and Eric Tsang.

Jing Boran, who was brought in at the eleventh hour to replace Taiwanese actor Kai Ko (You Are The Apple Of My Eye) following his drug conviction, does a solid job of endearing the audience to a spoilt brat character gifted with authority through cronyism rather than talent. Bai Baihe (Love is not Blind), on the other hand, is effortlessly endearing as the spunky, wannabe warrior with a chip on her shoulder.

Hui accomplishes an impressive degree of world-building in Monster Hunt. From secret government departments looking to incite a war to keep themselves in business, to luxurious restaurants where the rich feast on specially slaughtered and prepared creatures as though they were sashimi, Hui incorporates a menagerie of eccentric and intriguing characters to rival the best fantasy adventures.

Production design from Yohei Taneda is top drawer, building a rich and detailed world that feels both exotic and lived-in, while the human interactions with digitally created monsters are as good as anything previously seen in Chinese Cinema. That said, the character design itself veers closer to Hui’s previous work in the likes of Shrek and Puss in Boots, and is intentionally cartoonish rather than striving for photorealism. As a result, the monsters never feel as though they exist in the same realm as their human counterparts.

The screenplay, by Hui and Alan Yuen (New Police Story, Firestorm), also struggles to maintain a clear and coherent through line, with character motivations changing frequently and their ultimate goals sometimes difficult to pin down. The protagonists put their lives on the line to protect Wuba one minute, then sell him off for a tidy profit the next. However, despite its muddied logic, the impressive all-star cast, which also includes cameos from the likes of Tang Wei and Yan Ni, embrace their roles enthusiastically, while Hui’s energetic pacing keeps the viewer swept along with the action.

Younger audiences will likely be beguiled by Wuba’s too-cute antics and babyish cooing, with the character proving a potent merchandising goldmine to rival the Minions. Hui has clearly been influenced by popular Hollywood fare from the likes of Spielberg, Lucas and Jackson as much as classic wuxia legends like Journey to the West, but outside of its incomprehensible protagonist, Monster Hunt still feels wholly Chinese in its portrayal of mythology, folklore and politics.

The cocktail of big-name Chinese stars, high-end effects, broad slapstick humour and even the occasional musical number has seen the film score highly across numerous demographics at home, but whether or not these elements will be appealing enough to transcend the language barrier and resonate with family audiences internationally remains to be seen.