'Murmur of the Hearts': Review 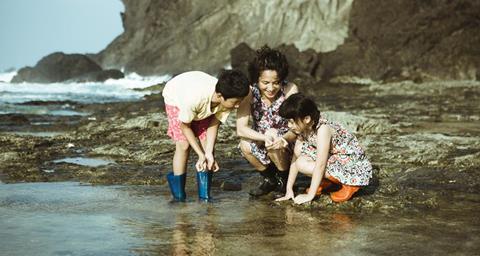 Striving for an elegiac tone, Sylvia Chang’s return to directing (after 2008’s Run Papa Run) crushes a delicate story of siblings separated after their parents’ break-up inside a spaghetti junction of flash-backs, sidebars, dream sequences, apparitions and magical realism. The Taiwanese-born, Hong Kong-based actress/director, who co-scripted Murmur of the Hearts with Yukihiko Kageyama, pulls a moving finale out of her flights of fancy, but the journey there can be wearing, its vagaries emphasised by Chen Yang’s repetitive score. The film opened the Hong Kong International Film Festival in March.

Acting is strong, in particular Isabella Leong and Joseph Chang, who deliver a troubled relationship which seems entirely believable, despite the heavy symbolism surrounding it

Clocking in at two hours, Murmur of the Hearts has much to recommend it, from strong central performances to some gorgeous lensing  from Leung Ming-kai on the Taiwanese island of Lyudao. While there is a moody strength at its core, Murmur suffers from Chang’s narrative sallies and an undisciplined structure which ultimately weakens the piece. While it’s something of a let-down, given its potential, Murmur of the Hearts will still find a following, particularly in Asia. When she hits the right note, Chang ‘s work can be delightful, and her leading actor and actress glow in this piece.

Central to Murmur is the character of Yu Mei (Isabella Leong, making a comeback), who dreams of her childhood on the ‘Green Island’ with her loving mother and brother. She has a complicated relationship with her boxer boyfriend, Hsiang (Joseph Chang), who is given an entire film of his own – detatched retina, tough coach, poor form, absentee sailor father – although they enjoy a vigorous sex life, shot lustrously through dappled window panes.

Yu Mei is a painter, and it soon becomes clear that she has become separated from her brother Yu-nan (Lawrence Ko) and mother Jen (Angelika Lee Sinje). Jen used to tell her children stories about mermaids who swim around the rocky shores of Lyudao, which sits 33 kilometres away from Taiwan and is known for hosting a penal colony. Gradually, Chang teases out the information – Jen, who ran a noodle shop with her brutish husband, had an affair with a dissident, became pregnant, and fled the island with an angry Yu Mei, leaving Yu Nan behind.

All three main characters – Yu Nan, who is a tour guide, frequently taking visitors to Lyudao, Yu Mei and Hsiang,who live in Taipei – are lost and long to make a connection. Yu Mei’s surprise pregnancy may force a resolution, however, even though Chang is loath to completely drop her mermaids, crashing waves and heavy symbolism and focus on the story’s arc. A dream sequence involving Yu Nan and a storm is particularly taxing, but the strands do eventually come together with the delivery of a baby and the promise of new life.

Acting is strong, in particular Isabella Leong and Joseph Chang, who deliver a troubled relationship which seems entirely believable, despite the heavy symbolism surrounding it. And Chang is well-served by her technical team; under-water camerawork is lustrous, but above ground, the island of Lyudao looks nothing like a prison, but a home which calls to its wandering children.