'My Life As A Courgette': Cannes Review 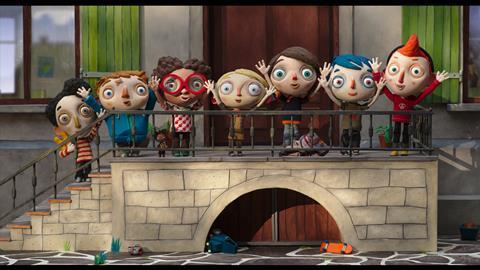 A compact triumph of stop-motion animation in the service of a bittersweet tale, My Life As A Courgette (My Vie de Courgette) is as delightful as it is affecting.  The story of a few months in the life of a 10-year-old orphan who believes he is responsible for the death of his alcoholic mother,  Courgette sustains a tone that acknowledges that life is a blend of good news and bad but that kindness and compassion can cut through a great deal of soul-crushing adversity. Acquisitions should be brisk following the film’s debut in Cannes Directors Fortnight.

All but the most hardened adult hearts will be moved

His real name is Icare but he insists on being called by the nickname his mother gave him. When kindly policeman Raymond drives Courgette to the orphanage, the understandably melancholy boy’s only possessions are an empty beer can and a kite he built and decorated himself. Courgette is gifted at drawing — the walls of his garret room served as his canvas until his mother’s unfortunate accident — and his charming sketches are frequent props as the story progresses.

The well-defined orphans fit at one table. Simon is the self-appointed tough guy. One little girl’s mother was deported back to Africa while she was at school. Another little girl is prey to obsessive tics. One little boy is curious about what adult couples do together in bed. Simon’s description is a classic kid’s-level interpretation of sexual congress.  And one brief narratively-justified element is a “Basic Instinct for 10-Year-Olds” moment.

The small staff couldn’t be more encouraging or devoted. Raymond comes to visit when he can, even though his status as a cop means he’s subject to pranks.

Courgette’s outlook brightens when 10-year-old Camille arrives by court order. Courgette’s first stirrings of love may be thwarted by the hiss-worthy aunt jockeying to get custody of her niece. The orphans devise a plan to interfere.

A board where each young resident can post his or her emotional “weather” each day, from angry storm to sunny is  incredibly basic but it’s the complexity of the feelings experienced by articulated puppets with impossibly large heads that gives the film — three years in the making despite its brief running time — its undeniable beauty.

The Ghost Train ride at an amusement park and the group’s adventures on a trip to play in the snow are visual highlights.

By European standards, this is probably suitable for ages eight and up. But it is not a pure distraction in the manner of so much fare aimed at young people. Think Bambi. The themes are serious and handled with grace and humor. All but the most hardened adult hearts will be moved.