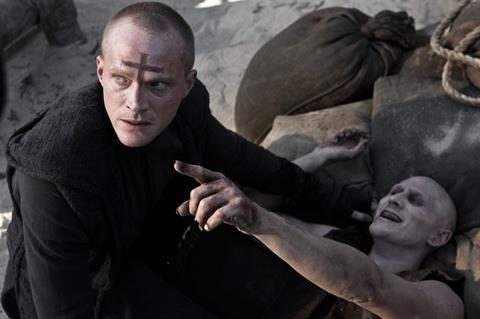 A mélange of apocalyptic western, gothic horror and vampire action movie, Priest won’t win any awards for narrative originality, that much is certain. Based on TokyoPop’s popular graphic novel series written by Min-Woo Hying, the film nips liberally from everything from the Blade and Resident Evil franchises to The Searchers and Legion, director Scott Stewart and star Paul Bettany’s previous collaboration. Still, while achingly familiar, Priest is streamlined and executed well enough to merit a pleased tip of the cap if not a rabid embrace from those comfortably within the movie’s demographic wheelhouse.

Priest is a model of economy, with well defined stakes and a simple quest.

The film’s gimmicky 3-D presentation — underutilised and entirely inessential — will help inflate theatrical grosses for what seems to be enough of a well crafted genre entry to help distributor Screen Gems launch yet another action horror franchise, in the vein of their Underworld and Resident Evil series.

While the commercial heights of the latter franchise, which has pulled in $674 million worldwide through four films, seems unlikely, high eight-figure international cumulative grosses here should be a lock, paving the way for more priestly bloodletting.The film opens on May 6 in the UK and rolls through Europe and internationally prior to its May 13 US opening.

A brisk animated opening unfolds under narration that sets up the parameters of this post-apocalyptic world. After centuries of brutal conflict, what remains of humankind has beaten back its vampire enemy, relegating the remaining few to reservations in outlying areas. Still, most humans live in a walled city ruled in totalitarian fashion by the church and Monsignor Orelas (Christopher Plummer). The mercenary priests, trained as lethal fighters during the vampire wars, now live in isolation, unnecessary relics of the past.

When the simply known Priest (Bettany), however, finds out that his niece Lucy Pace (Lily Collins) has been kidnapped, he defies Orelas’ orders, breaks his vows, and sets out from the city in order to rescue her. Priest is joined by Hicks (Cam Gigandet), his niece’s boyfriend and also a young sheriff from the outlying town of Jericho, and Priestess (Maggie Q), alongside whom he used to fight. He soon learns that vampires are back on the rise, and additionally led by a half-breed former colleague, now known as Black Hat (Karl Urban).

The movie’s true vampires are far more snarling creature than human, putting a nice twist on genre expectations. And director Stewart leans a bit less heavily on special effects than he did in Legion, his debut. While a couple sequences showcase the takedown of various CGI vampire beasties, Priest also incorporates more hand-to-hand combat, and benefits from it.

Priest’s characterizations are thin and its dialogue more functional than revelatory. The mitigating sins here are ones chiefly of omission, though. Priest strikes a few wholly artificial movie moments, wherein characters pause or pose in a way that plays to the camera while not being explicitly a direct address. Additionally, screenwriter Cory Goodman misses a great chance to flesh out the post-apocalyptic landscape and provide crucial character shading and differentiation by not delving further into the choices of those that choose to live in desert towns like Jericho.

As it pertains to its main mission, however, Priest is a model of economy, with well defined stakes and a simple quest. Once they discover a rebuilt vampire hive and ascertain that there’s a looming threat, Priest and his cohorts simply track Black Hat, and his plan — take an old train to the city, where he can take over and rule — isn’t predicated on the grasp of much nuance. The fight sequences work nicely, even if Priest’s script doesn’t display much faith in its religious underpinnings.

Bettany lends the proceedings a mooring touch of gravity, and Maggie Q’s bicycle gang takedown is probably the action setpiece highlight of the movie. Gigandet, however, is far too pin-up pretty to be believable as a gritty young lawman, and additionally trades in telegraphed hotheadness that comes across as risible.

Screenplay: Cory Goodman, based on the graphic novel series by Min-Woo Hyung